The election of an Iranian-born Jewish woman to the New York state Senate marks a new departure for her community, traditionally excluded from politics. For Anna Monahemi Kaplan, it's an opportunity to give something back to a country which saved her, reports The Tablet (with thanks: Michelle): 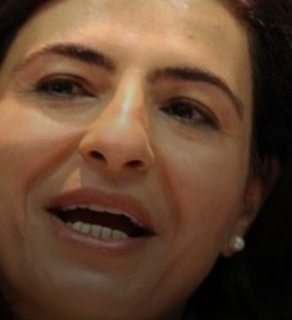 Anna Kaplan: from refugee to senator

Democrat Anna Kaplan’s recent victory over Republican incumbent Elaine Phillips helped flip the New York state Senate, long dominated by Republicans, to Democratic control. That’s a very big deal in New York politics but the win is notable for other reasons as well—it makes Kaplan, who came to America as refugee from Iran, the highest ranking Persian-Jewish elected official in the state.

Kaplan was born Anna Monahemi in Tabriz, Iran, and raised in Tehran. There was a recorded Jewish presence in Tabriz, located in the mountains of northwest Iran, since at least the 12th century, but that ancient community of some 400 Jews was wiped out in a blood libel massacre in 1830. About a century and half later, when she was 13 years old, Kaplan fled the Islamic Revolution as a child refugee and arrived in the United States as part of an airlift of Iranian children. She initially stayed in Crown Heights, Brooklyn and then fostered with a family in Chicago where she learned English and attended high school until her parents and family were able to legally join her in the United States more than a year later. She went on to graduate from Yeshiva University’s Stern College for Women and Benjamin Cardozo School of Law.

“Persian Jews stayed out of politics in Iran,” writes Kaplan on her Facebook page. “My parents and community were afraid of being noticed—they were a small, vulnerable minority in a conservative part of a conservative country. But here in the United States, we have been given so much opportunity and I am so grateful to this country for opening its arms that I’ve had to give back.”

In the Jew-hating universe of Linda Sarsour and Tamika Mallory, would Kaplan be classified as a “White Jew” notwithstanding her Iranian Jewish background making her ineligible for participation in the Women’s March or would her Zionism, albeit in a Person of Color be sufficient in and of itself to exclude her from the movement?

To second Anonymous, your example shows the absurdity of classifying all Jews as 'white'. I suspect Sarsour and Mallory would call Kaplan a Persian of the Jewish faith and get round the contradiction that way.

These Judeophobes/anti-Zionists have their own unique of defining "white." After all, if you look at Sarsour, she's as white as most white Americans. Of course, that is an empirical judgement. So if whites are bad, then she is bad. However, they seem to be defining Jews as white because, as the American white antisemites used to say, "Why do Jews have all the money?" and "why are all Jews rich?"

So rich is the criterion for being white, although there millions of white and pink-skinned people who are really poor. But they don't count for being non-white apparently because they are apparently defined as racist. But there is another contradiction: There are many Arabs who are very rich. Think of the Qataris, the Kuwaitis, other Gulf Arabs, and the Saudis, not to mention some Lebanese, Egyptians and Syrians. Are they white? Are they white even if they finance Hamas [which these crypto-Nazis define as a "liberation movement"]? Yes, Qatar funds Hamas and also keeps slaves, the foreign workers who often don't get paid and cannot leave the sheikdom of Qatar because their passports were confiscated when they came there. But we hear no outrage from the Sarsours and Mallorys and Farrakhans over slavery in Qatar. I guess that Qataris and the ruling ath-Thani family especially are good guys and certified non-whites despite their wealth. By the way, I saw just a few days ago that Qatar had the highest per capita income in the world. But they are not "white" so it seems.
Maybe it doesn't make sense to you but these Women's March characters and many men likewise cannot deal with facts and reason.
https://en.wikipedia.org/wiki/House_of_Al_Thani