For Sarah Ansbacher, one of the perks of working at the Aden Jewish Heritage Museum is meeting people with interesting anecdotes. Here she recounts an encounter between an Israeli and the small Jewish community of Rada'a in the north of Yemen. The Jewish community of Rada'a no longer exists, its Jews either having fled the country or now living under terrible conditions in a compound in the capital Sana'a. 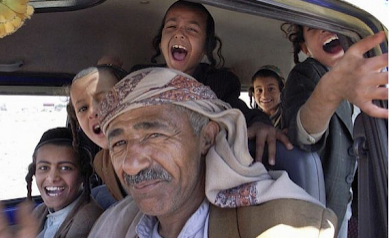 In this photo taken in 2009, Jewish boys travel back to Rada'a after a morning of Hebrew classes in a neighbouring village (Photo: AP/Hamza Hendawi)

The other day, I heard a fascinating story from an Israeli man who went on a trip to visit Yemen in 2000 (who had no prior connection or roots to the country). He did a trek from the capital Sanaa to a town called Rada’a, a few days’ walk south.

There, they discovered a small Jewish community that was still in existence, numbering something like 100 people. (He’s not sure if it still remains, as a result of the subsequent civil war.)

In his words, it was like he had stepped back in time. The lifestyle of this little community appeared little unchanged as it would have been several hundred years ago; in modes of dress, trades (the men engaged in traditional trades like leather crafts), the little children he saw playing together.

When they learnt he was a Jew from Israel, they welcomed him in with open arms (even slaughtering a little sheep for a special meal with him.)

But one of the most remarkable things was that they were able to communicate. They spoke fluent, biblical Hebrew - as it would have been spoken over two thousand years ago. And he spoke to them in Ivrit - modern Hebrew.

But this is exactly what happened here. The man told me the conversation was wonderful to hear, they'd use biblical expressions so it would sound something like, “And behold, it was light.”

But, they understood each other. Perfectly.

The Yemenite builder's son - with a PhD
Posted by bataween at Friday, December 21, 2018