Egypt to invest in renovation of its 'Jewish heritage'

First the good news: Egypt is to invest millions in the restoration of crumbling synagogues. (Of the 13 synagogues in Cairo, only three are in use: the Ben Ezra, Shaare Shamayim in Adly St, and the Karaite synagogue). The not so good news is that moveable Jewish artefacts are also being declared the property of the Egyptian government.

My comment: while the restoration of synagogues is a welcome move, Jewish organisations outside Egypt will have no stake in the project, and therefore no say in how the restoration is undertaken. It must also be emphasised that several synagogues and their contents were private family property abandoned by  owners who were forced to flee. These owners never gave their consent to an Egyptian state takeover.   Jewish artefacts, which were the property of the community or of Jewish individuals,    are being appropriated to boost tourism.  In addition, the state sets a worrying precedent by asserting an unlimited  right to the  property of Egyptian Jews outside Egypt (while denying the right of Egyptian Jews abroad to access civil registers). Point of No Return has reported that Magda Haroun, the  Cairo Jewish leader, has called for four paintings in the Louvre belonging to an Egyptian Jew who died in WWII to be 'returned' to Egypt. Jewish community leaders  abroad have called the demand 'outrageous' and crazy'. 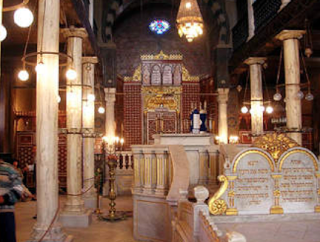 Inside the Ben Ezra synagogue, one of the few still functioning in Cairo

Egyptian President Abdel Fattah Al-Sisi will allocate $71 million for the renovation of synagogues and Jewish heritage sites in the country.

The announcement about the grant was made by Egypt’s Minister of Antiquities, Khaled El Anany, who said that "there is importance in renovating the Jewish synagogues, just like the renovation of the pharaonic, Islamic and Coptic heritage.

It is important to remember that the Jewish items and synagogues belong to the Egyptian government." “Most of the synagogues in Egypt are in poor condition, and must be renovated so they can be turned into visitors' centers," added El Anany, who was quoted in the Yediot Aharonot newspaper.

The announcement said that the renovation will be carried out by the Egyptian government only, without the intervention of foreign governments and Jewish organizations from abroad.

Smadar  Perry in  her Hebrew  Yediot Aharonot article reports that 500 Jewish  items collected from the synagogues will be put on public display.  "President El-Sisi  affirms that Jewish artefacts and synagogues belong to the Egyptian government.''
Posted by bataween at Thursday, December 13, 2018

This is very interesting content! I have thoroughly enjoyed reading your points and have come to the conclusion that you are right about many of them. You are great. 3d innovations: home renovation singapore