Egypt 's renovation budget is not just for Jewish sites

The Egyptian cabinet has refuted reports that the state had allocated 71 million dollars for the sole renovation of Jewish sites, stating that the allocation was intended to cover Coptic and Muslim sites as well. Al Ahram reports (with thanks: Levana)

A statement by the cabinet’s media centre on Friday said that the reports that the whole amount had been allocated to renovate Jewish heritage sites solely were “unsubstantiated rumours.” 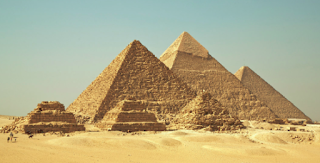 The Giza pyramids are part of the renovation project

Last week, several local and international media outlets reported the Minister of Antiquities Khaled El-Enany as saying that President Abdel-Fattah El-Sisi had allocated the amount as part of the ministry's plan to renovate Jewish heritage sites in Egypt.

“The Ministry of Antiquities has allocated EGP 1.3 billion to renovate a number of archaeological sites in Egypt, including the Jewish synagogue in Alexandria,” read the Friday statement. “The Egyptian government gives equal attention to Egypt’s entire heritage, whether Pharaonic, Jewish, Coptic or Islamic,” it added.