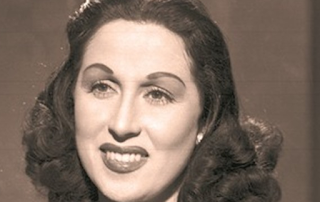 Has Egypt found new pride in the cultural contributions made by its Jews?  It is a measure of how far the Egyptian-Jewish iconic star, Laila Mourad, has been rehabilitated that the Egyptian media is celebrating the 100th anniversary of her birth this year. (Mourad ended her career amid accusations of being a spy for Israel. )Tomorrow, the National Center for Theater, Music and Folklore will mark the occasion at Cairo Opera House's Hanager Theatre. Egypt Today reports (with thanks Boruch):

Held under the auspices of Minister of Culture Inas Abdel Dayem and Head of the Cultural Production sector Khaled Galal, the ceremony will present a documentary film about the late actress. The documentary will be followed by a concert presented by the National Center for Theater, Music and Folklore’s band.

Laila was born in a Jewish family in Cairo in 1918 to a Syrian father, Zaki Mourad, and a Polish mother, Gamilah Salmon. Her father was a composer and a singer who encouraged Laila to sing in the radio in the 1930s. Being the eldest daughter, she later had to financially support her family.

Her debut as a singer in the cinema was in “The Victims”, six years before starting her acting career with "Long Live Love", starring singer Mohamed Abdel Wahab, who also made her sign a contract for ten musical records.

Producer, director, scriptwriter and actor Togo Mizraahy gave her roles in seven films, including “Laila Bent El-Reef” (Laila From the Countryside), “Laila Bent Madares” (Laila: The School Student), and “Laila”. Out of the 28 films of her career, 17 carried her real name.

Mizraahy was able to work on Laila’s shyness, which was her main obstacle to leading a great acting career. He taught her how to boldly face the camera and trained her on how to control her facial expressions and voice.

The marriage of Anwar Wagdi and Mourad in 1945 significantly contributed to the immortal booming success of this artistic duo, increasing both their credibility and popularity among the audience, especially that Mourad and Wagdy were the only artistic couple at the time.


Read article in full
Posted by bataween at Sunday, December 09, 2018

Nothing for us Jews to be proud of here. She converted to Islam!

All the non-muslim "egyptian" entertainers converted to islam. For the same reason david daniel kaminsky became danny kaye. But in the end, they were treated as either jews or christians. Speaking of which, Leila murad was eventually accused of spying for Israel which effectively ended her career.