A synagogue has existed since 2008, but it is only now that the small Jewish expatriate community of Dubai has felt confident enough, in the wake of a warming relationship between Israel and the Gulf States,  to expose itself to publicity. It is a win-win situation for Dubai, too, since it can boast minority rights and religious tolerance. (With thanks: Lily, Violet)

DUBAI — One Saturday last month, the handful of worshippers were waiting, chatting amiably to kill time. They had recited Sabbath morning preliminary prayers, but the tenth man was yet to arrive, and services could not proceed without the necessary quorum. Waiting for a minyan was an inconvenience as ancient and familiar as Jewish prayer itself. But the location was extraordinary: a barely-known synagogue in a residential neighborhood in the Emirate of Dubai.

The Dubai Synagogue is a welcoming haven for Jews in the Middle East business powerhouse — whether they are veteran residents, temporary sojourners or the few visitors lucky enough to learn of its existence. Established 10 years ago, it is the flagship, and, for now, sole, operating institution of The Jewish Community of the Emirates. 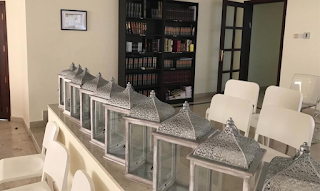 One of the community’s leaders, Ross Kriel, walks a fine line between the cardinal concern of insuring security, while also nurturing a vision of a sustainable, and, eventually, thriving organized Jewish life in Dubai. Kriel, an Orthodox Jew from South Africa, moved to Dubai with his wife and two young children to work as a lawyer at an energy company six years ago. He’s an adventurous sort of Jew who relishes finding creative solutions to the challenge of adhering to Halacha, Jewish law, in the remote locale.

For centuries, Jews did business and mixed socially—if warily—with Arab neighbors from Baghdad to Beirut, but most were expelled or emigrated when Israel was founded in 1948. Today, as the region’s economy grows and attitudes toward Israel soften, a fledgling Jewish community in Dubai has founded that city’s first synagogue.

After meeting for years in one another’s homes, Dubai’s Jews—expatriates in fields such as finance, law, energy, and diamonds—three years ago rented a villa in a quiet residential neighborhood for services. The unmarked building features a sanctuary for prayers, a kosher kitchen, and a few bedrooms for visitors or community members who don’t drive on the Sabbath.

“We’ve come a long way since I first started going to Dubai 30 years ago,” says Eli Epstein, a New Yorker who helped found the synagogue and donated a Torah. “Back then, people actually told me that I should avoid using my last name because it sounds too Jewish.”

Read article in full
Posted by bataween at Friday, December 07, 2018