'Arab unity' is based on suspicion and division

The suggestion by Donald Trump that Arabs might form their own peace-keeping force prompts Norvell B DeAtkine in Lima Charlie News to write this thoughtful piece debunking the fantasy of Arab unity. The problem is that many peoples within the Arab world wanted no part of Arab nationalism. Hostility to Israel has failed to unify the Arabs, who are still more loyal to family, tribe or clan than to their own states. (With thanks Melvyn) 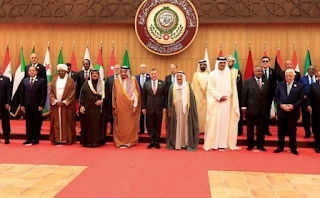 The Ottoman Empire that followed the fall of the Abbasid Empire was a distinctly Islamic empire constituting what anthropologist Carleton Coon, in his seminal study Caravan, described as a “mosaic” of people. The Ottoman Sultan ruled over a pastiche of peoples, religions and sects. People were divided by religion, not race or nationality.

The major groups, Christians, Jews and Muslims, by practicing fealty to the Ottoman Sultan, lived more or less independently within their religious communities – called Millets. Jews and Christians were distinctly second-class citizens, but understanding their subordinated position in political life, they generally were able to live peacefully and, sometimes, thrive within the Ottoman Empire. Religion came to define the economic mosaic system based on religious doctrine and traditional culture. For example, Christians were often barbers or butchers, and Jews were a critical element in business and finance.

Into this rough, but seemingly medieval economic system, the Europeans introduced the ideology of nationalism. The Ottoman Empire, widely considered the last Islamic Empire, splintered into nations, hurried along by various European powers.

Unfortunately the concomitant ideas of democracy and individual freedom did not take root. The non-Arabs or non-Muslims were suddenly outsiders in their own homelands where they had lived for centuries. With the post-Ottoman expulsions of Jews and steady erosion of Christian communities the intricate mosaic system ceased to exist and the economic health of the “Arab world” declined dramatically. The simple truth is that Arab nations did very little trade with one another and almost all was outside their region.

Because of this, attempts to form an Arab economic union have been singularly ineffective. I have observed that whereas the European Union is based on the free travel of citizens and goods, the Arab world is the exact opposite. Political and regime ruling anxieties create a hostile environment to unified economic development.

In fact most Arabs, enthusiasts and detractors, see Arab nationalism as Sunni Arab nationalism. It did not unify Arabs – it further divided them. A critical pillar of this Arab unity dream was the establishment of the Arab League in 1946 under the leadership of King Farouk of Egypt. Farouk saw himself as replacing the ousted Sultan of the defunct Ottoman Empire.

Most Sunni Arab elites were ebullient on the concept of Arab unity and enthusiastically welcomed the Arab League, but Mohamed Hussein Haykal, the highly respected Egyptian journalist and historian, questioned its usefulness from the beginning. He opined that not only would political differences be an obstacle but also the fact that history, legal codes, agriculture, and industry “are necessarily different in the different Arab states.”

Elie Kedourie, the distinguished Orientalist wrote, “Events have proved him [Haykal] right, and have shown the Arab League to be a system based on conflicting ambitions, and cemented with bitter mutual suspicions.” Kedourie believed that the Pact of the League “proved to be a device designed not so much to bring about Arab unity as to keep the so-called Arab states at arms length from one another.” It was another chimera producing what Lebanese writer Fouad Ajami called the “Dream Palace of the Arabs.”

The League failed to unite the Arabs politically, culturally, economically, or most importantly, militarily. It is the latter which graphically exposes the shaky structure of the whole idea of Arab unity, a prime example being the Arab States “peacekeeping” forces inside Lebanon. The history of the Arab Deterrence Force (ADF) sent into Lebanon in 1976 to quell the bitter civil war between Christian militias and the Palestinian Liberation Organization (PLO) is a case study illustrating the ineffectiveness and dangers of this type of Arab operation.

Although it was supposed to be a joint Arab force, the vast majority of the forces were Syrian and, as the Christians had assumed all along, the Syrians turned the peacekeeping operation into a permanent occupation of Lebanon. Entering Lebanon in 1976, they remained until 2005. It is a legitimate fear of Arab regimes that inviting brother Arab forces to assist in their defense will lead to permanent occupation.

Conventional wisdom among much of the Western Middle East scholarly community is that the greatest threat to stability in the Arab world was the creation of Israel. As one who lived in the Middle East for over eight years, I wish I had a dollar for every time I heard the phrase “Israel is a foreign body lodged in the heart of the Arab world.” Generations have been brought up to having this embedded in their worldview.

British historian Albert Hourani wrote that the primary issue confronting all Arabs was “Israel and the fate of the Palestinians.” Celebrated British adventurer and official Freya Stark repeatedly reminded the British government that the Palestinian issue was the one which undermined the British campaign to counter the very popular Arab-oriented fascist propaganda in the early days of World War II.

Given the supposed universal and visceral hatred of the Israeli state, one would be moved to believe that in efforts to erase the “Zionist” state Arab unity would be at its zenith. But that has not been the case. Nothing has illustrated the disunity of the “Arab world” more than its efforts to destroy the Israeli state. This is despite the humiliation inflicted on over 400 million Arabs by just nine million Israelis (20% being Israeli Arabs) in four wars.

It must be plainly stated that the Arab lack of success has nothing to do with innate intelligence or courage. No nation or people have an earmark on that. Rather is it a function of a culture that, as the peerless Tunisian historian Ibn Khaldun wrote, promotes individuality in which every man wants to be the leader. “[T]here is scarcely one among them who would cede their power to another.”

It is still a largely tribal/clan oriented society in which a civil society has never taken root. Concentric circles of loyalty, in which only family, tribal or clan relatives are completely trusted, vitiate the trust in your fellow soldier.

Read article in full
Posted by bataween at Wednesday, December 26, 2018