18 groups petition Pompeo not to restrict import of Jewish items 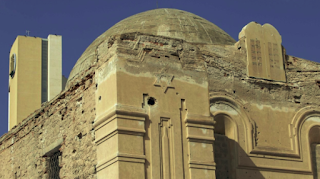 The letter, which concerns agreements made by the U.S. with other countries in order to prevent looting and theft of cultural heritage, asks Pompeo to exclude Jewish artifacts from the agreements, saying they don’t really belong to those countries’ governments. “

The signing of memoranda are based on the false premise that property confiscated from Jews when they fled or were ethnically cleansed from Arab countries constitutes the national heritage of these countries,” JIMENA director Sarah Levin said in an e-mail to J. JIMENA is concerned about important objects of Jewish heritage — from Torah cases to prayer books — left behind as Jews fled countries in which they were persecuted following the establishment of the state of Israel in 1948, and says the State Department agreements deny Jews access to their own past.

“There are estimates that in today’s current values Jewish refugees were forced to leave behind six billion dollar’s worth of private and communal property and we are committed to pursuing justice for these losses,” she normal; line-height: The letter was co-signed by organizations including the Anti-Defamation League, the Conference of Presidents of Major American Jewish Organizations, the Simon Wiesenthal Center and the World Jewish Congress North America. It calls on Pompeo to ensure “that a policy is in place that protects Jewish and Christian heritage by explicitly excluding them from any import restrictions and reject any stateclaims to communal or individual property."

On behalf of the undersigned Jewish organizations we are writing to encourage the State Department and the Bureau of Educational and Cultural Affairs to explicitly recognize the rights of Jewish and minority heritage when negotiating future cultural property agreements with countries in North Africa and the Middle East. During the 20th century, 850,000 indigenous Jews from the region were ethnically-cleansed or forced to flee lands their ancestors lived in for over two-thousand years. Virtually all of their personal and communal property was confiscated. The dispossession and denationalization of nearly one million Jewish refugees was done under the color of law and today there are very few Jews remaining in most of these countries.
The State Department has signed Memoranda of Understanding (MOUs) between the United States and other governments that deny Christians and Jews from Arab countries the right to their historic heritage. The Cultural Property Implementation Act (CPIA) was enacted to deter the looting of archeological sites by enacting temporary import restrictions on significant cultural items as part of a multilateral effort.  Unfortunately, over time these restrictions have expanded beyond both the law’s intent and its legal authority.
We recognize the importance of these MOU agreements in deterring the pillaging of archaeological and ethnological materials. However, an additional goal of these agreements, as noted in the Convention on Cultural Property Implementation Act, is to, “increase international access to cultural property.” This has a particular relevance with regard to Jewish heritage, which encompasses both moveable (e.g., Torah scrolls, ritual objects, libraries, communal registers) assets and immovable (e.g., synagogues, cemeteries, religious shrines) assets. Regrettably, it is not safe – and in many cases forbidden by national law – for Jewish refugees from Arab countries to return to the countries that exiled them.
On July 31st, 2018, during a public hearing at the Department of State on the Request of the Government of the People’s Republic of Algeria for U.S. import restrictions on virtually the entire cultural heritage of Algeria, representatives of exiled Middle Eastern Jews urged the Cultural Property Advisory Committee to the President to withhold these import restrictions. Algeria has failed to meet the criteria set for restrictions under the Cultural Property Implementation Act. It would be unconscionable for the United States to give the Algerian government authority and control over the property of its oppressed and exiled Jewish and Christian citizens.

As MOU agreements demand that the governments themselves show they are taking measures to preserve and protect the heritage in their own countries, North African and Middle Eastern countries, including Algeria, requesting MOUs should be asked to present an inventory of remaining Jewish moveable and non-movable patrimony and an account of what they are actively doing with respect to the care of synagogues, cemeteries and other sites and items of Jewish and Christian heritage.
The recent statement by the Principal Deputy Assistant Secretary for Near East Affairs, Joan Polashick, that the State Department is working on an additional five MOUs with Middle Eastern and North African nations makes it essential that a policy is in place that protects Jewish and Christian heritage by explicitly excluding them from any import restrictions and rejecting any state claims to individual and communal property.
We ask that the State Department’s Bureau of Education and Cultural Heritage adheres to the limitations set by Congress under the Cultural Property Implementation Act by denying broad, excessive import restrictions to nations that have neither valued nor cherished the ancient heritage of Jewish, Christian, and other minority peoples. We  further request that all future MOUs from the region include provisions that list and name specific Jewish and Christian items to be excluded from the restricted list of items. Such items include: Torah scrolls, Torah cases, Jewish prayer books, Jewish manuscripts, religious ceremonial articles, and all Jewish ritual and prayer materials that include Hebrew inscriptions or references to original Jewish owners – whether they be individuals or Jewish institutions.
It is more important than ever for the United States to stand in solidarity and defense of Christian, Jewish and other religious minorities in the Middle East and North Africa, to ensure that these living communities are not deprived of their rich cultural heritage. Thank you for your attention.  We look forward to remaining in communication with the State Department on this crucial issue.
Posted by bataween at Friday, December 14, 2018