Why are Jewish refugees so little known?

The question of Arab and Islamist Jew-hatred goes to the heart of the conflict with Israel. So why have Jewish refugees from Arab countries been so neglected, Lyn Julius asks in the Jerusalem Post (with thanks: Jean-Loup)

Seventy years ago, the newly-established State of Israel opened the floodgates to hundreds of thousands of Jewish refugees. Many were Holocaust survivors from the displaced persons camps or remnant communities of Eastern Europe, but the biggest contingent seeking refuge in Israel came from Arab and Muslim countries. 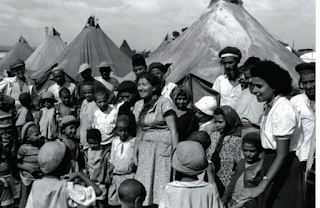 Yemenite Jews in a Ma'abara camp in 1950

The official day to remember the exodus of Jewish refugees from Arab countries and Iran is November 30, but Jewish institutions and organizations around the world, in association with Israeli embassies,  are holding commemorative conferences, film screenings and lectures throughout November and into December.

More Jews (850,000) fled Arab countries than Palestinian refugees (approximately 711,000), and their exodus was one of the largest movements of non-Muslims from the region until the mass flight of Iraqi Christians. Although they were non-combatants, Jews had to run for their lives from persecution, arrests on false charges, mob violence and executions. Their property was seized and they were left destitute. The Arab and Muslim world has neither recognized, nor compensated them.

Yet the issue and its implications for peace has barely penetrated the Israel-Arab debate within Jewish communities, let alone trickled into mainstream consciousness.

The question of Arab and Islamist anti-Jewish hatred goes to the heart of the conflict with Israel. So  why have Jewish refugees been so neglected?
Israel treated the refugees as Zionists returning to their homeland. Mizrahi Jews were encouraged not to look back at the past, but to build new lives for themselves in Israel and the West.

Paying political lip service to a “settlement of the refugee problem,” Israel failed to spell out clearly in official texts that there were Jewish as well as Arab refugees. It feared that raising the Jewish refugee issue would only prompt the Arab side to raise their “refugee” issue. The Arab side did not cease doing so, while Israel remained silent. It is only in the last decade that the Israeli government has regretted what the late Tommy Lapid termed its “greatest public diplomacy blunder.”

The damage may seem irreversible. The failure to frame the refugee issue as an exchange of roughly equal populations has led to a lopsided view among academics and opinion-formers: the Palestinians are seen as the principal victims, the Israelis as interlopers from Europe, aggressors and dispossessors.
Mizrahi Jews, whose communities predate Islam by 1,000 years, have been written out of history. Even the Diaspora Jewish leadership and international Jewish groups fighting antisemitism and Israel’s cause project a eurocentric worldview. Their frame of reference is the Holocaust, not the destruction of the indigenous Jewish communities of the greater Middle East. Jews in general are seen to enjoy power, despite their history as a vulnerable minority, and enjoy “white privilege,” despite their ethnic origins in the Middle East. The new vogue for “intersectionality” pointedly excludes Jews.

Even where there is awareness of the mass expulsion of Jews from Arab lands, they are not generally seen as victims: their plight was apparently successfully resolved. In the fashionable “hierarchy of oppression” of marginalized groups, Jews rank well down the list.

When the press and media do focus on Mizrahi Jews, it is to promote the folklore that passes for Mizrahi history – the nostalgic celebration of tradition, costume, music and food. Desperate to show that the conflict is soluble, the media loves examples of commonality and interfaith collaboration between Jews and Arabs.
In other respects Mizrahi Jews are invisible, despite comprising over half of Israel’s Jewish population today. One journalist found it impossible to interest the US Jewish press in an article on Mizrahi poverty in Israel: “While poverty may be a Jewish concern abroad, wrapped up in such concepts as tikkun olam [repairing the world], it isn’t a sexy issue. African refugees in Israel are interesting, Jews from Africa less interesting,” he wrote.

n the decades while nothing was said about Jews from Arab countries, the myth took hold that Jews and Arabs lived in peace and harmony before the creation of Israel. Arab and Muslim anti-Jewish prejudice, like antisemitism generally, is often ignored, derided or downplayed. Academics or public figures who draw attention to Arab or Muslim antisemitism lay themselves open to charges of ‘islamophobia’.

Compounding the problem, Mizrahi Jews themselves have played down their sufferings (which paled, compared to that of Holocaust survivors). Following centuries of ingrained insecurity and dehumanization in the Arab world, minority “dhimmi” Christians and Jews did not ask for their rights, only favors. Jews from Arab countries are often themselves to blame for distorting their own history “to flatter” their enemies. The author Robert Saltoff found some North African Jews so anxious to put a positive spin on their treatment, they even claimed that “the Nazis were not so bad.”

Mordechai, the owner of a prosperous factory in Marrakesh, abandoned his business, house, and motherland to come to Israel with nothing because his daughter Rachel, diagnosed with a rare disease, was refused treatment in Morocco because she was Jewish. She eventually became blind because she was not treated in time. Yet Mordechai told his Israeli-born children and grandchildren that his motive was “Zionist.”

The Israeli government has finally woken up to the importance of the Jewish refugees for peace-making. In the five years since Jewish Refugee Day was added to the calendar by Knesset law, public awareness of the story of these Jews has slowly grown. But there is still a long, long way to go.

Read article in full
Posted by bataween at Wednesday, November 28, 2018