Exiled Jews were prominent in the arts 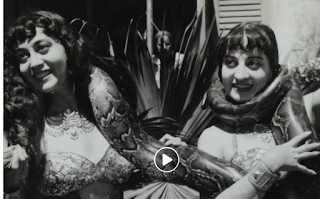 In the run-up to 30 November, the official Day to Commemorate Jewish refugees from Arab countries and Iran, the World Jewish Congress has produced a short video on famous Jews in philosophy and the arts.

Among  others, the video tells the story of the Jamal sisters from Egypt, King Farouk's favourite belly dancers. They were on tour abroad when they received a message from their father not to return to Nasser's Egypt - 25,000 Jews were expelled after 1956.

Belly dancers admired by the Egyptian king
Posted by bataween at Tuesday, November 27, 2018

Access to computers and other control systems which might provide you with information about the way the world revolves around technology should be unlimited and total. All information should be free and accessible to all. That is why we at INTEGRATEDHACKS  have come come up with a team of highly motivated and dedicated hackers to help you get access to information you are being deprived of. Our services include and are not limited to hacking of social media accounts,email accounts, tracking of phones hacking of bank cards and many more.
Have you ever been hacked? Need to recover your stolen account, Want to monitor your kids,spouse or partner, Change your school results track messages from an email or mobile number and many more, INTEGRATEDHACKS is the one for you. Hundreds of our clients have their phones, social media accounts, emails, servers, may bots and PCs hacked consistently and efficiently. Our professional hackers for hire team is highly qualified and can hack anything or device you desire without giving the target any form of notification which makes us one of the best.