'Uprooted' by Lyn Julius is a welcome corrective to the one-sidedness prevalent in public discourse regarding the Arab-Israeli conflict, writes Brandon Marlon in his Jerusalem Report review:

The British-born daughter of Mizrahi Jewish refugees from Iraq, Julius (co-founder of Harif, an association of Jews from the Middle East and North Africa in the United Kingdom) compiles a series of historical essays highlighting the plight of the lumpen and often forgotten Jewish communities throughout the Arab world that, after many centuries of existence, met their fateful and sudden demise variously between 1950-1980. While in 1945 as many as 856,000 Jews dwelled in the Middle East and North Africa, today approximately 4,500 remain – an unprecedented international dislocation of Jews. 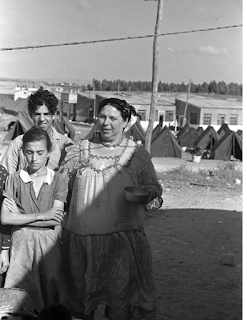 The author depicts two competing historical narratives concerning Sephardi and Mizrahi Jewry: the mythic Convivencia (mutual toleration during the Golden Age), and the lachrymose conception of Jewish-Muslim history, which sadly but evidently is the more accurate of the two. She makes clear that only those who downplay the ubiquitous dhimmitude and Muslim antisemitism can avoid the dolorous facts, from the massacred Jewish community of Khaybar in Arabia under Muhammad to the collaboration of Muslim Brotherhood founder Hassan al-Banna and Grand Mufti of Jerusalem Haj Amin al-Husseini with Nazi Germany, to the vicious Farhud of 1941 in Iraq (in which 179 Jews were brutally murdered) and subsequent mass expulsions wherein “the Jews were faced with a stark choice: suitcase or coffin.”

The culminating period of woes following the advent of the State of Israel, termed the “Jewish Nakba,” is portrayed as a shortsighted and wholly avoidable upheaval: “Two victim populations arose out of the Arab-Israeli conflict, and the Arab leadership bears responsibility for needlessly causing both Nakbas – the Jewish and the Arab.”

Moreover, the number of Jewish refugees fleeing 10 Arab countries exceeded that of Palestinian Arab refugees fleeing what is now Israel by more than 100,000: “Their displacement was on a larger scale than that of the Palestinians, and their material losses were greater. Whereas Arab refugees fled a war which Arab leaders had instigated, the Jews were victims of unpredictable violence and a deliberate legislative policy scapegoating them for being Jews.”

Julius decries the West’s lack of awareness of and attention to the Jewish refugees from Arab lands, ascribing the dearth to a warped schema: “In the fashionable ‘hierarchy of oppression’ of marginalised groups, Jews rank well down the list. They are seen to enjoy power, despite their history as a vulnerable minority, and ‘white privilege,’ despite their ethnic origins in the Middle East.” She likewise laments how, even in Israel, the suffering of Mizrahi Jewry has not received its rightful place in the political context: “The peace agenda is seriously skewed when a trauma afflicting more than half the Israeli population – those who descend from refugees from Arab and Muslim countries – has been airbrushed out of dialogue and coexistence projects.”

Well-researched and accessible, “Uprooted” is a modern and welcome corrective to the one-sidedness frequently prevalent in public discourse regarding the Arab-Jewish conflict. Julius rightly calls attention to salient points elided by purblind post-colonialists insensible of the reality “that Arab and Muslim rule is a colonialism that predates Western European colonialism.” She holds to account countries bereft of their Jews who, nonetheless, promote phantom communities for tourism’s sake, “without the inconvenience of live Jews.” As a text, “Uprooted” joins important predecessors including Norman Stillman’s “The Jews of Arab Lands” (1979), Joan Peters’ “From Time Immemorial” (1984), and Martin Gilbert’s “In Ishmael’s House” (2010), and as a historical narrative complements the documentaries “The Forgotten Refugees” (2005, director Michael Grynszpan) and “The Silent Exodus” (2009, director Pierre Rehov).

While some readers may understandably prefer a single, linear narrative as opposed to the book’s serialized articles, “Uprooted” will especially suit piecemeal perusers. The book is generous with photographs of the people, holy sites, historical documents, and lively culture of the now-defunct Jewish communities across the Arab lands and includes numerous appendices, a bibliography, and an index.

More reviews of UPROOTED
Posted by bataween at Friday, October 19, 2018