Of Claudia Cardinale and waning diversity

Excellent must-read by Alberto M Fernandez, a member of the board of MEMRI. Fernandez points out that the greatest cost of waning Middle Eastern diversity is to the very countries who expelled their minorities. (With thanks: Lily) 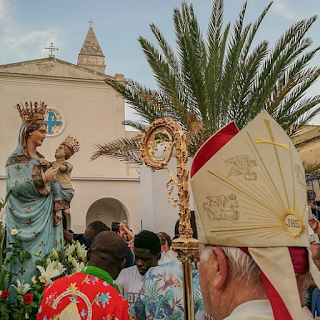 The procession  of the Madonna of Trapani through the Tunisian resort of La Goulette was revived in 2017. It was  the first since 1960.

A friend reminded me during a recent visit to Tunis that it was the birthplace of both the famed historian Ibn Khaldoun and the popular Italian actress Claudia Cardinale. The 80-year-old Cardinale still has fond memories of Tunisia and made her feature film debut in a French-Tunisian co-production of Goha (1958) starting Omar Sharif as the eponymous Middle Eastern folk hero.[1]

The Italian community of Tunisia she belonged to had roots going back hundreds of years and Tunis provided refuge in the 16th century to Jews from the Italian city of Livorno, Sephardic Jews from Italy who had, in turn, been expelled from Christian Spain. Cardinale's ancestors came later, poor Sicilian Catholic migrants to the French Protectorate of Tunisia arriving in the 19th century by the tens of thousands. Many worked in ports and in fishing. The seaside town of La Goulette (Halk Al-Oued) which had its picturesque "Little Sicily" Quarter, was a famed center for this migration. A 1959 French newsreel on the Feast Day of the Assumption of the Virgin Mary (August 8) in La Goulette showed a lively community with a public procession of the Madonna of Trapani featuring thousands of participants.

A few years later that entire community was gone. The Virgin of Trapani would not be carried in public ceremony again in La Goulette until 2017 when a much smaller and largely Sub-Saharan African crowd of devotees would do so in a much more modest ceremony. Tunisia's Italian minority was driven out by state action spurred by a May 1964 nationalization law that targeted European-owned farmland and other properties. In recognition of the end of a once vibrant community, the Vatican reached an accord in July 1964 with the Tunisian government handing over 107 now redundant churches, some of which are still being used as schools or sports clubs or police stations or have fallen into ruin.

As befits a country known for its relative tolerance, the end of the historic Italian community in Tunisia was not violent. Roughly contemporary with its disappearance was the rapid decline of Tunisia's Jewish community, which fled to Israel or Western Europe as part of a cruel process of "decolonization" and nationalism well described by the great Tunisian Jewish intellectual Albert Memmi. A person who considered himself a Tunisian "Arab Jew," who was strongly in favor of the "oppressed," found that he had no place in a nationalist Arab Muslim state or society which was free of outside control but anything but tolerant or liberal .

What happened in Tunisia happened in the Republic of Turkey, in Nasser's Egypt, and in Hashemite Iraq as ancient non-Muslim communities were driven out in the 20th century. The 1955 Istanbul riots organized by Turkish officials targeted, of course, a native Greek community long established before the first Turk arrived in Anatolia. The 1961 and 1963 nationalizations by Egypt's Gamal Abdel Nasser drove out a Greek community with roots in antiquity. The 1941 pogrom or Farhud of Iraqi Jews in Baghdad focused on another community with roots dating to Ezra and Nehemiah and the Babylonian captivity. Of course, the cases are different. In Egypt and Tunisia, economic and political pressure forced out communities of long-resident foreigners. In Iraq and Turkey, state-organized violence targeted local citizens belonging to religious minorities. But in all these circumstances, it was modernizing nationalist or secular regimes that aggressively drove out these minorities, not Islamists.

Whether done in the name of Turkification or Arab Nationalism or Cyprus or Palestine, local innocent people had to be made to pay for the supposed political transgressions of others elsewhere or for the mere fact of being the wrong type of person in the wrong place and time. These early rounds of ethnic cleansing preceded most of the wars and revolutions that would wrack the Middle East and North Africa, and preceded the rise of political Islam that would target still other religious and ethnic minorities in the region. Whatever the tragedy of destroyed communities, abandoned structures, and uprooted families, the greatest cost was, in my view, to the countries doing the uprooting themselves. They became duller, more monochrome and insular.

These emigres and refugees enriched Europe, America, and the nascent state of Israel. They probably avoided worse horrors if they had stayed where they were in the lands that would see decades of turbulence. What the nationalists destroyed in that frenzied period from the 1940s to the 1960s was an older, Arab, Turkish, and Islamic tradition of cosmopolitan life which, while not to be romanticized, brought great vitality to these crossroads, to the Mediterranean, to Anatolia, and to Mesopotamia. Jews had once found refuge in the Muslim East from intolerant Europe.

The Ottoman Sultans had brought minorities from throughout the empire and settled them in Istanbul to enrich their new capital. While Greeks had an ancient history in Egypt, it was Muhammad Ali Pasha in the 19th century who facilitated their flourishing. In Tunis, it was the Bey Al-Hussein II who in 1830 granted the Catholic Church land to build and hold in perpetuity the Cathedral of Saint Louis of Carthage (now a music hall).These nationalist regimes would eventually falter and various strands of intolerant political Islam would, if not always rule, strongly influence public opinion with xenophobia replaced by religious bigotry.

That same hatred would, in the absence of these departed communities, always find new targets for this ceaseless purifying war against cosmopolitan diversity: secular or liberal Muslims, freethinkers, homosexuals, Turkish Kurds, Copts, and Yazidis.

Read article in full
Posted by bataween at Tuesday, October 23, 2018