Mizrahi Jews are key to understanding the Arab-Israel conflict

Wide-ranging interview in Fathom, the magazine of British-Israel Communications (BICOM), with Lyn Julius, author of Uprooted. Julius explains how and why Jewish civilisation in the Arab world vanished in one generation. She describes what brought Nazi Germany, the Muslim Brotherhood and the Grand Mufti of Jerusalem together into an alliance and how this impacted Jews in the Middle East. 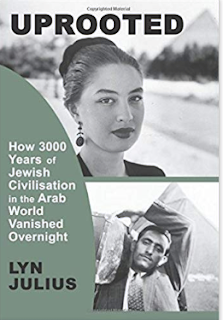 Grant Goldberg: What prompted you to write the book?
Lyn Julius: I have a strong connection to the region. My parents arrived in Britain in 1950 as Iraqi-Jewish refugees, and throughout my childhood I was very conscious of the connection with Iraq, mainly because I still had family there. Conditions deteriorated for the remaining 3,000 Jews of Iraq after the 1967 Six-Day War and Israel’s defeat of the Arab countries. Saddam Hussein embarked on a reign of terror, executing nine Jews in Liberation Square in Baghdad. My grandparents were still in Iraq as well as various aunts and cousins and all were desperate to leave. The community’s telephones were cut off, their jobs were lost and their university entry blocked. Their very lives were in danger – some 50 Jews were arrested and never seen again.
I honestly think that understanding the Jews of the Middle East is the key to understanding the whole Middle East conflict. The way the Jews have been treated in Arab countries points to a major dysfunction in Arab society: the inability to tolerate anyone who is different from the mainstream, whether non-Sunni Muslims or minority non-Muslims.
I’ve been very involved in Harif, the UK Association of Jews from the Middle East and North Africa, which I founded 13 years ago. As well as organising events to raise awareness of the history and culture of Jews from the Middle East and North Africa, I’ve been blogging and writing. Eventually, I realised I had accumulated enough material for a book.
Also, there has not been much written about Mizrahi Jews, certainly not in English.[i] The most mainstream work was In Ishmael’s House by Sir Martin Gilbert, published in 2010. Most of the research on the subject has been done by historians writing in French, such as Georges Bensoussan, Nathan Weinstock, Shmuel Trigano, Bat Y’eor and Paul Fenton, who, despite his English origins, is a professor at the Sorbonne. David Litman also wrote about Jews from Morocco. I hoped my book would make the essence of their work accessible to English readers.

LINKING PRESENT TO PAST

GG: You begin your book in the tomb of the prophet Ezekiel, which has been converted to an Islamic holy site in present-day Iraq. Once visited by 5,000 Jews a year, it is now devoid of Jewish pilgrims. What made you start there?
LJ: I wanted to show that Jewish continuity in the Middle East goes back to Biblical times. The prophet Ezekiel is one of 17 Biblical figures buried in Syria, Iran and Iraq. That region has as much of a Jewish history as does the land of Israel. The Jews were taken as slaves to Babylon after the destruction of the First Temple. It’s important to know that Jews have lived for a long time in these lands and shaped the culture. There was a sort of symbiosis between Jew and non-Jew, often misunderstood as coexistence. It wasn’t coexistence; that word assumes there was an equal relationship. The Jews were influenced by, and actively shaped, the culture. Islam is much closer to Judaism than Christianity. Local Muslims felt Jews had a direct line to God as the elder religion. An Iraqi Jewish friend of mine, around the time of Sukkot, once overheard her Muslim neighbours talking as rain fell. ‘The feast of the Jews must be over,’ they said, because they knew that Jews pray for rain at the end of Sukkot. It’s almost as if this culture could set its watch by the Jewish calendar. The Jews were intrinsic to the rhythm of life in the Middle East.
It all ended in the space of a generation. Some 850,000 Jews fled 10 Arab countries; most found refuge in Israel, where over half the Jewish population has roots in Arab or Muslim lands. Israel organised unprecedented airlifts and rescue operations. A greater number of Jews were displaced than Palestinian Arabs from Israel, and it was the largest exodus of non-Muslims from the Middle East until the mass flight of Christians from Iraq after 2003.
However, the plight and dispossession of the Jewish refugees remains an unresolved and unrecognised injustice. Age-old communities are now extinct and only some 4,000 Jews remain in the Arab world. So, with the exception of Morocco, the physical presence of the Jews has been wiped out almost completely from the Middle East and North Africa outside Israel. Memory was also erased; the younger generation often had no idea that Jews ever lived in their lands. However, since the ‘Arab Spring,’ the memory of the huge contribution made by the Jewish community is being revived. In Iraq, intellectuals are lamenting the departure of the Jews and the fact that the country went downhill once they left, leaving it economically and culturally impoverished.
GG: Is this erasure of history the result of top-down persecution by government or bottom-up hostility from the ‘Arab Street’?
LJ: In the past, often both. In Syria, Yemen, Libya Iraq and Egypt both governments and peoples have been adamantly hostile. Anti-Jewish riots also erupted in Morocco and Tunisia, although there was less state-sanctioned persecution in these countries. Public opinion remains hostile despite, in Egypt’s case, having signed a peace agreement with Israel. Today, we can see a kind of rapprochement coming from the top-down, for pragmatic reasons. President Abdel Fattah al-Sisi is really quite friendly to Israel. In Morocco and Tunisia, the motivation is a bit different. The Moroccan King is very aware of the importance of tourism to his country and he has invested a huge amount of money into preserving Jewish heritage. He also has a strategic motive, which not many people are aware of; he wants to get American support for his policy objectives, especially his claims in Western Sahara. And, of course, he believes the Jews control American foreign policy. When the US proposed that a UN peacekeeping mission in Western Sahara help monitor human rights a (Moroccan) diplomat was quoted as saying: ‘It’s very useful for us to have someone — a strong lobby group, perhaps — to help talk the State Department out of this idea. The Jewish lobby is a very strong one.’ That’s another reason why Morocco is edging towards normalising relations with Israel.

DHIMMITUDE AND THE DHIMMI SYNDROME

GG: What is ‘dhimmitude’? And what is the ‘dhimmi syndrome’?
LJ: The dhimmi status of non-Muslims was mandated by the 7th century covenant of Omar, after Muhammad defeated the non-Muslims living in the Arabian Peninsula. Basically it stated that Christians and Jews would be spared their lives provided they obeyed certain conditions. Notably, the Jews had to pay a special tax and were not allowed to be armed or defend themselves. The system recalls a Mafia-style racket; you pay protection money to the ruler. The other characteristics of the dhimmi status was that Jews and Christians had to abide by certain humiliating restrictions in order to be free to practise their religion. A Jew’s testimony was worth half that of a Muslim in court, Jews had to wear certain clothing or coloured patches, live in certain areas, and so on. In short, you had to know your place as a non-Muslim. And there was always pressure to convert to Islam.
The lived experience of dhimmitude can produce a ‘dhimmi syndrome,’ i.e. a particular deferential or frightened mentality or psychology. And this syndrome can remain with a people even after they leave an Arab country. As an example, I read an article not long ago about a Jew living in Mexico who was driving with her mother. She had been born in Mexico while her mother had been born and raised in an Arab country. They were stopped by a policeman, who falsely accused the daughter of jumping a red light. She insisted that she was innocent, but her mother pleaded with the policeman for clemency. Having lived in an Arab country, the mother knew that ‘a Jew does not claim his rights but asks for favours’. This attitude can remain for a whole lifetime. The syndrome downplays suffering and seeks to flatter the powers-that-be. It still exists today among the remnant Jewish communities.
Read article in full
Posted by bataween at Thursday, October 04, 2018