In a sign of increasingly warm relations between Israel and the Gulf States, the Israeli national anthem was played in Abu Dhabi at an international judo competition in the presence of an emotional Israeli minister of culture, Miri Regev. In a previous contest, Hatikva and the Israeli flag were banned and  the winning Israeli had to sing the words himself. Regev also made history by being the first Israeli minister to visit the Sheikh Zayed Grand Mosque.  The Jerusalem Post reports:

Hatikva (was  heard a second time) in Abu Dhabi as Israeli judoka Peter Paltchik won gold in the under 100 kg weight category on Monday. Paltchik defeated Azerbaijani judoka Elmar Gasimov in the finals. 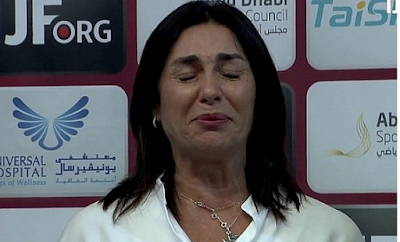 Miri Regev moved to tears during the singing of the Israeli national anthem (Photo: IJF)

Paltchik, who was born in Ukraine and moved to Israel when he was 9 months old, began learning judo at age four. The 26-year-old judoka won his first gold medal at the "Grand Prix Cancun" in June 2017.

He also won a bronze medal in the 2018 European Judo Championships that was held in Tel Aviv in April.

Judoka Sagi Muki won gold on Sunday in the under 81 kg weight category. Israel's national anthem "Hatikva" was played, even though sport event organizers in the Guft have made Israel's participation conditional on it not displaying national symbols. 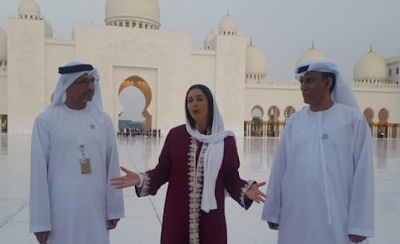 Culture and Sports Minister Miri Regev, who was in attendance, openly wept. Following the event on Sunday, Regev made an official visit to the Sheikh Zayed Grand Mosque in Abu Dhabi.  “The whole message here is of unity and peace,” she stated.

Read article in full
Posted by bataween at Tuesday, October 30, 2018

Hello! I simply wish to give a huge thumbs up for the great data you've gotten right here on this post. I will probably be coming again to your blog for more soon. casino online