Yesterday, I met a Tunisian Jew now living in France.

Joseph H told me his story. His family left Tunisia at the time of the Bizerte crisis in 1961. His family did not have French nationality, and his is the only branch of his family not to be living in Israel (The Tunisian Jews arriving in the early 1960s were sent to Beersheva). 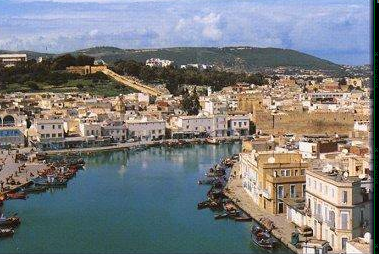 The port city of Bizerte, until 1961 an important French naval base

When the Bizerte crisis broke out, Jews were caught up in the conflict between the French and the Tunisian Muslims who wanted to expel the French from their naval base. There were about 1,000 Jews living in Bizerte at the time. Soon they were accused of collaborating with the French and threatened with violence.

The French government was ready to evacuate all their nationals from Bizerte, including the Jews who had French citizenship. But it was due to the powers of persuasion of Colonel Uzi Narkiss that the French  eventually agreed to include  300 (stateless, or)  Jews of Tunisian nationality in their rescue operation. (Click here to read the full account).

Joseph H's family let the country with nothing. The refugees were transported to the transit camp at Camp d'Arenas in Marseille. They had every intention of continuing their journey to Israel.

Even though Joseph's father was not allowed to take any assets out of Tunisia, he had managed to send a small sum of money in advance out to relatives in Bordeaux, France to pay for the onward journey. He went to retrieve what was his, but was told there was no money for him.

And so Joseph's family was forced to settle in France. It was a blessing in disguise for them, as they were spared some of the hardships that confronted new immigrants to Israel.
Posted by bataween at Wednesday, September 05, 2018