What was the status of Judeo-Arabic in Iraq?

In the light of the controversy over the status of Arabic in Israel - 'special' but not official' - it is interesting to examine what the status of Judeo-Arabic was in Iraq. Few Iraqi Jews, and almost no non-Jewish scholar could read the Hebrew characters in written documents called Hetzi Kalmus.  In the 1940s, writes historian Sami Sourani, the Iraqi government demanded that all official records be translated into Arabic. Today in the Arab world there is renewed academic interest in Jewish history and language.

The official documents of the  Iraqi Jewish Community are written in ancient Hebrew letters (modified) and called Hetzi Kulmus. The letters were modified to accommodate words from various languages that were assimilated in the spoken Jewish dialect over time. There were words that were adopted from classical Persian, Greek, Mongolian, Arabic, Turkish, and some words from other ethnic communities that lived in Iraq. 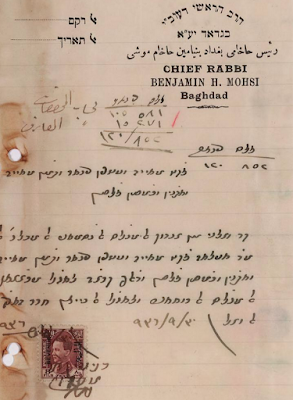 The documents were written by different writers and each has his style of writing. There are very few Iraqi Jews who can read and understand what was written and what was behind the words and contemporary expressions. There is no doubt that there is hardly an Iraqi non-Jewish scholar who can read this language.  A few years after the Farhud, the Iraqi Government demanded that the Jewish Community of Baghdad  translate into Arabic all important documents and records of meetings and send a copy to the Ministry of Interior Affairs. This Ministry had the right to ask questions and elaborations of anything in those documents.

When the Jews lived in Iraq and when they felt that they were an integral part of this country, there was no academic interest in their history or language or anything related to their culture. There was hardly anything mentioned in textbooks studied at schools. The Iraqi Government closed Jewish newspapers even though they did not deal with politics but mostly with Arabic literature.

In recent years there has been some interest in Jewish culture, in general. The University of Cairo has now a Department of Jewish studies and some research studies were written about the Jews of Spain. The University of Baghdad has a new Department for Jewish studies with a faculty teaching Hebrew and you even find such a department at the University of Najaf. Thre are a few Ph.D. dissertations about the history of the Iraqi Jews! The common thing in all those is that they show the nice side of the coin and the good life of the Jews once upon a time.

A recent article written about the Jews of Iraq was written by a professor at the University of Baghdad. There is nothing new in it, except that there is an appendix to this research showing the names of Iraqi Jewish families that hold the highest number of land deeds  registered at the Department of Land Deeds Registration in Baghdad, that is called TAPO in spoken Arab Iraqi Language.

More from Sami Sourani
Posted by bataween at Sunday, July 29, 2018