The wonder woman of World War 2

If you have seen the film Casablanca, you will know that Morocco was a conduit for refugees escaping Europe during WW2. Less known is a remarkable Jewess called Helen Cazes Ben Attar, who spearheaded the effort to support the refugees and found them jobs. Here is a post by North African Jews in World War 2: 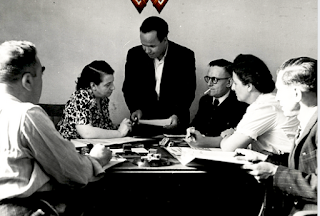 Not many people are familiar with Helen Cazes Ben Attar.
Helen was in the forefront of the progress of women's rights in Morocco and worked tirelessly for the Jewish refugees who had escaped Europe.

Helen had been a trailblazer from early on, when she was one of the first Jewish girls to complete the Moroccan matriculation exams. She went on to study law and became the first female Jewish lawyer in Morocco. She soon became active in the Jewish community in Casablanca and worked with welfare organizations, the Jewish National Fund, and was appointed the first head of WIZO (the Women's International Zionist Organization).

Helen was also first in other respects. Following the outbreak of WWII she was the first to recognize the dire straits in which the Jewish refugees from Europe found themselves. She acted to alleviate their hardship and worked to mobilize the Jewish community to welcome and support them.

After the liberation of North Africa by the Allies, Helen continued to work for the refugees - she found work for 1,276 Jewish refugees in the American Army and in the factories which supported the Allied fighting forces. She also became the head of the Joint.

On her gravestone, her children inscribed the following: "To our mother, a legendary woman who delivered innumerous souls from danger." Helen was a wise and courageous woman with a kind and warm heart.

The website North African Jews in World War 2 is seeking more information - documents, photos or personal accounts - which could shed light on the unique figure of Helen Ben Attar.
Posted by bataween at Friday, July 06, 2018

I suggest that one place to look for info about Helen Ben Attar is in the books and writings of Gitta Amipaz Silber. Gitta, whom I knew, was a Belgian Jewess who succeeded in fleeing to Morocco during the war. She was helped and protected in Morocco, as she told me. Maybe she knew Helen Ben Attar and mentioned her in her writings.