Some good news at last regarding the Iraqi-Jewish archive: four senators have introduced a bill (to be posted tomorrow) calling for the agreement to return the archive to Iraq to be re-negotiated by the State Department. The State Department  say that they are working with Iraq to obtain an extension. This means that the collection of Jewish books and documents  shipped to the US for restoration in 2003 will almost certainly stay there beyond the September deadline: 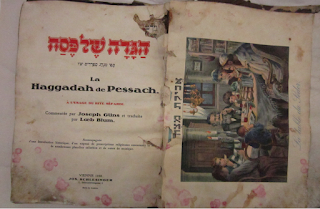 Pages from a Pesah Haggadah found in the archive - before restoration.

Here is the press release issued by Senator Pat Toomey, one of the bill's sponsors:

Washington, D.C. - U.S. Senators Pat Toomey (R-Pa.), Charles Schumer (D-N.Y.), Marco Rubio (R-Fla.), and Richard Blumenthal (D-Conn.) have introduced a bipartisan measure to help protect a trove of historic Jewish artifacts.
Known as the Iraqi Jewish Archives, U.S. soldiers uncovered the collection of 2,700 priceless books, religious texts, and civic documents in the basement of Saddam Hussein's secret police headquarters in 2003. Because the archive was in a badly damaged state upon discovery, the U.S. and the Coalition Provisional Authority signed an agreement whereby the U.S. would restore the material and then send it back to Iraq.
In addition to preserving the archive, since 2013 the National Archives and Records Administration has displayed the collection throughout the United States for the benefit of scholars, citizens, and the Iraqi Jewish diaspora. The collection is currently set to return to Iraq in September 2018, despite the fact that only a few Jews live in Iraq today. The Senate resolution calls on the United States to renegotiate the agreement with the Iraqi government to allow the archive to remain in America for a longer period of time.
"In 2014, I introduced a resolution with Sens. Blumenthal and Schumer calling on our government to keep this priceless archive in the United States," said Senator Toomey. "That resolution passed the Senate unanimously. It makes no sense for this material to return to Iraq when the vast majority of Iraqi Jews and their descendants live in the Diaspora. I hope that the Senate swiftly approves our resolution to once again urge the State Department to keep these artifacts in the United States."
"These personal and irreplaceable trove of Jewish artifacts still belong where they can be preserved and accessed by the Jewish community and scholars, not returned to Iraq," said Senator Schumer. "These invaluable cultural treasures like a prayer book and Torah scrolls belong to the people and their descendants who were forced to leave them behind as they were exiled from Iraq. The State Department should make clear to the Iraqi government that the artifacts should continue to stay in the United States."
"By urging the State Department to renegotiate our agreement with the Iraqi government, this resolution will help ensure that the recovered Iraqi Jewish artifacts remain in the United States, where they can be protected and preserved for future generations," said Senator Rubio.
"These recovered Jewish artifacts must be protected and preserved," said Senator Blumenthal. "Keeping these artifacts in the United States will ensure that people from around the world will be able to see these priceless pieces of history for years to come."

*Gina Waldman of JIMENA (Jews Indigenous to the Middle East and North africa) welcomed the news as a 'good step'.
"We are keeping the pressure on and  working on this very diligently.  Almost 80% of JIMENA time is spent on the Iraqi archives," she said. She urges US citizens to show a copy of the bill to their representative and ask for their support.