Iraqi-Jewish archive ownership 'up for debate'

The first of three articles in the Forward about the Iraqi-Jewish archive by the culture editor, Talya Zax, makes depressing reading. (For full background to the case, see under 'Jewish archives').  As well as claiming that the ownership of the archive is up for debate, the article disturbingly claims that the  status of the archive is ambiguous because Iraqi Jews 'left voluntarily, if under duress'. Apparently it is not a violation of international law for a government to have seized its citizens' property. Should the Iraqi-Jewish community bring a lawsuit against Iraq,  it is also unclear if the case could be heard in a US court.  However,  successful Holocaust restitution does set a precedent. 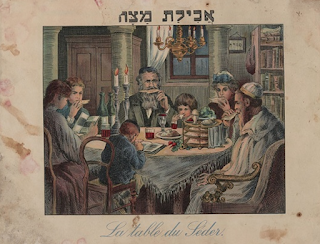 Page from a Haggadah found in the Iraqi-Jewish archive

One reason the ownership of the archive appears to be up for debate is that the majority of the Jews who left Iraq did so voluntarily, but under duress. That was also the case for many European Jews who fled the Nazi menace, and the decades-long work of Holocaust reparations has established a mixed precedent as to what can and ought to be done with their property. Ambassador Yasseen declined to discuss the grounds on which Iraq claims ownership of the archive.

I asked Gina Waldman, president of the advocacy organization Jews Indigenous to the Middle East and North Africa (JIMENA) how the Iraqi Jewish community can claim ownership of materials left behind when their owners chose to leave. “This was what was considered communal property,” Waldman said. “No one person could sign off and say, well, this synagogue now belongs to the Iraqi government.”

Basri, in an article outlining a legal argument for the United States to refuse to return the archive, refers to U.N. Resolution 242. Passed after the Six Day War, that statute calls for a “just settlement of the refugee problem.” Yet the Iraqi Jewish community has limited legal opportunities, says Patty Gerstenblith, director of DePaul College of Law’s Center for Art, Museum and Cultural Heritage Law. The State Department, Gerstenblith said, granted the archive a status known as immunity from seizure, meaning that courts cannot hear cases or issue orders about it. “Doesn’t matter if it’s stolen property,” she said.

That leaves only one option, which would be for the community to bring suit against Iraq. It’s unclear if such a claim could be heard in American court. “Usually,” Gerstenblith said, “when a government takes property away from its own citizens that’s not a violation of international law.” What about the example of Holocaust restitution? Objects looted during the Holocaust can be recoverable so long, Gerstenblith said, as suits are brought by clearly identifiable owners. A less direct precedent has been set for communal property. “In a sense, the Holocaust expropriations have been treated as a unique set of cases,” Gerstenblith said. “Having said that, there’s no reason that a court couldn’t extend that to another historical circumstance.”

The Iraqi Jewish community has yet to attempt any legal action. In the short term, it’s unclear if they’ll have to, as the State Department would not comment on plans for the archive’s return. A spokesperson specifically declined a request to confirm that the current administration intends to return the archive in September, as scheduled. If the return is delayed, it won’t be for the first time.

Read article in full
Posted by bataween at Monday, July 16, 2018

Forward is happily and proudly antisemitic and anti Israel. It says it is. And we need to stop pretending it's a "Jewish" press it's not. It started 120 years ago as a Yiddish socialist press focusing on the labor movement. It happened to involve Jewish issues because the people in the labor movement were largely Russian and eastern European Jewish socialists and communists. But "Forward" or as it was known 'The Forward' was always anti Zionist just as the left wing of the labor movement before the CPUSA was kicked out of the unions, was. In the last 10 years Forward changed their name, they changed their logo from blue and white to yellow and they moved even further left into the Hamas camp.