Impact of the Suez crisis on the Jews of Egypt

Useful summary in  History is Now of the expulsion of Jews from Egypt after 1956. (With thanks: Boruch)


The Suez Crisis, aside from producing an understandable rise in support for President Gamal Abdel Nasser and his regime, had devastating effects for persons living within Egypt who had become ‘egyptianized’ i.e. those who were not Egyptian citizens; or those whose ancestry was not wholly Egyptian, but had attained Egyptian citizenship through various legal statutes. 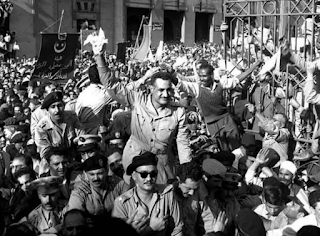 These people were collectively known as the mutamassirun, and, in the immediate post-colonial period in Egypt (from 1922 onwards) they owned a large share of capital and operated a large number of businesses in Egypt. They were also acknowledged to have made significant contributions to Egyptian cultural, religious and linguistic diversity in the past.

Although measures to expel members of the mutamassirun were already underway before the Suez Crisis came to a head, the Crisis is widely seen as giving Nasser the necessary impetus and legitimacy to proceed to make it extremely difficult for ‘egyptianized’ persons to remain in Egypt. It was a natural step for Nasser to seek to blame the Suez Crisis on the mutamassirun population.

After all, Nasser had risen to power on an avowedly pan-Arab, anti-colonial message. As Britain had directly ruled Egypt from the late nineteenth century until 1922, and France had previously invaded under Napoleon in 1798, the mutamassirun were easy targets for blame post-Crisis Egypt, as many were of British or French nationality or extraction. There was also a sizeable population of Jews living in Egypt around the turn of the twentieth century.

As the pre-Crisis period coincided with an increasingly confident and assertive Zionist movement, leading up to the creation of Israel in 1948, which led to great discomfort across Arab states, the Crisis only provided Nasser with a further reason to expel large numbers of the Egyptian Jewish population in its aftermath. For the Jews specifically (including those Jews who also happened to be British or French citizens), Nasser’s policy of removal post-1956 was carried out in two ways: expulsion and ‘voluntary’ emigration.

With regard to expulsion, the Egyptian government was able to make the number of Jews removed from Egypt seem much lower than the actual number by statistical sleight of hand: the estimate that at least 500 Egyptian and stateless Jews were expelled from Egypt by November 1956 does not include the expulsion of those Jews that were French or British citizens, nor does it include any member of a family who was not deemed by the Egyptian authorities to have been the ‘head of a family’, but who nonetheless had to leave Egypt along with the head of their family.

didn't Michael Lasker or Laskier write up this subject in detail?