Forward trilogy does not do archive saga justice

At first glance, it is heartwarming to see that Talya Zax, the culture editor of the Forward, has devoted a trilogy of articles to the saga of the Iraqi-Jewish archive, which the US has promised to return in September. But reader irritation and even anger soon begin to mount. 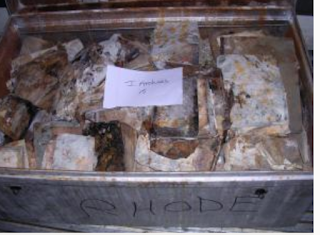 A crate of waterlogged items from the Iraqi-Jewish archive. The crate was marked with the name of  Harold Rhode, an orthodox Jew working for the Pentagon in Baghdad in 2003, who first drew attention to the archive.

Firstly, Zax has got elementary facts wrong: the Babylonian exile began in 586 BCE, not in 596 BCE. The troubles of the Jews are said to have started in 1948,  ie can be blamed on the creation of Israel - no mention of the 1941 Farhud in this context.Then the man who discovered the archive in the waterlogged basement of the secret police headquarters is not even named - Harold Rhode. The impression is given that members of the Iraqi National Congress were present at the salvage operation. (More accurately, Ahmed Chalabi  facilitated it. Other key figures like Natan Sharansky  are not given the credit they deserve.) The Hebrew inscription in the photo is not on the ceiling but the wall of Ezekiel's shrine ( bizarrely, the caption calls the site by its Muslim name, Dhu al Kifl).

But the most egregious omission is that nowhere in the three articles does Zax refer to the fact that the archive was not abandoned by departing Jews in the same way as they 'lost their life', homes, assets and property, but was physically seized by Saddam Hussein's regime. Witnesses watched aghast as Saddam's men carted off piles of books and documents from the ladies' gallery of the Bataween synagogue.The ownership of the archive ceases to be 'up for debate', but appears more of an open-and-shut case of brazen theft.The extraction from Iraq may have been legal, but was based on a false premise.

Zak  gives credence to the Iraqi ambassador who claims that Iraq has a 'deep emotional tie to the archive'. Yet there has ben hardly a peep about 30,000 other documents concerning the Baath regime  : the US shipped these from Iraq and insists on retaining them 'for security reasons'. Who might guarantee that the 'museum-like space in which the ambassador pledges to house the archive on its return to Iraq will be preserved, and the archive smuggled out, sold to the highest bidder  or destroyed? Then there is the fear  that the archive will not be accessible to them exiled Jews themselves, an argument which the writer fails to develop. (Past experience does not inspire confidence.)

The horrific stories told by the Iraqi  ladies of the Bene Naharayim congregation  contradict the idea that these Jews left 'voluntarily, but under duress'. No amount of quibbling can deny the fact that these people fled Iraq as dispossessed refugees and that Arab states were responsible for the Jewish exodus. Granting reparations to the Palestinians should not obviate reparations to Jews.

It is a pity that the articles are written in the style of, 'he said, she said', with scrupulous equivalence between thief and victim. With the return of the archive to Iraq imminent, few readers new to this issue will be persuaded of the justice of the Jewish claim.

I used to read articles in the very eurocentric Forward. I found them to be nothing but anti-Semitic lies and half-truths. So is anyone really surprised at their article about Iraqi jews? Or that they even acknowledge that jews lived outside of Europe?

Did their token mizrahi, Sigal Samuel, contribute to this mess?

I think Talya Zax managed to make the mess on her own.

It is hard for me to read such drivel as that of this ignorant, miseducated young woman, Ms Zax. But I read part of one article where she talks of Moshe Sharett's proposal for compensation for both Iraqi Jews and Palestinian Arab refugees and/or offsetting the monetary claims of each group. The merits of the proposal be as they may, Zax offends by writing as if the palestinian Arabs were innocent of the suffering of the Jews in Iraq and had no part in it. That belief --no doubt an ignoramus like Zax was sincere, if prejudiced-- is simply false. The British-appointed mufti of Jerusalem, Haj Amin el-Husseini, was in Iraq in the late 1930s and early 1940s. He was blamed by an Iraqi government commission investigating the Farhud pogrom of June 1941 for inciting Arab attacks on Jews. Likewise, the commission blamed palestinian Arab teachers in Iraq as well as members of Husseini's entourage.
Later, before the 1947 UN General Assembly Partition recommendation of 11-29-1947, Husseini and other representatives of the palestinian Arabs took part in Arab League meetings at which it was decided to invade the Land of Israel if a Jewish state were to be declared and to persecute and oppress and rob [does "expropriate" sound better?] Jews in Arab countries [see Malka Hillel Shulewitz' book]. So the palestinian Arabs and their leadership were also responsible for the war/invasion and persecution.
The so-called "Left" in the USA is often ignorant of real history and well-indoctrinated in false narratives, etc. Recall that many or most US universities are meant to indoctrinate.

Eliyahu, she also attributes the transfer plan of Iraqi- Jews for Palestinians to Moshe Sharret, in fact it was Nuri al-Said, the Iraqi PM, who first suggested the idea. No-one much talks of 'linkage' between Jewish and Palestinian losses anymore, it has been replaced with the concept of an international fund. And another of Zax's misconceptions is that Palestinian losses exceed Jewish ones.