Why the Arab world declined after flight of Jews 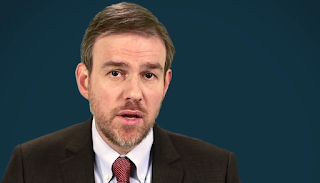 This Prager education video may be a year old, but it remains highly topical: the journalist Brett Stephens (now at the New York Times) explains why antisemitism is at the root of the Arab world's stunted growth and corrupts every aspect of Arab society.

You will not hear this explanation from journalists and academics, who assume that antisemitism in the Arab world is as natural as desert sand. The culprit is not colonialism, unemployed youth, the Sunni-Shia divide or any other politically-correct excuse.

The flight and expulsion of some 900,000  Jewish citizens led to a social, economic and intellectual decline. It is a documented fact that post-Inquisition Spain went into decline after expelling its Jews; so did Tsarist Russia at the turn of the 20th century. The Arab mind tries to find a scapegoat for its failures. Antisemitism makes the world seems simple: it all boils down to a malevolent Jewish conspiracy.

Nor is Israel the cause of antisemitism: pogroms in Palestine, Iraq and Libya predate the creation of Israel, and the 'Oslo peace' years saw the worst violence against Israel.

Successful nations learn from their neighbours; Arab states have made a point of hating theirs. For Israel it's a pity, for the Arabs it's a calamity.
Posted by bataween at Tuesday, June 19, 2018

3 things I find wrong in this summary. 1. Antisemitism in the Arab world IS as natural as desert sand. It's characteristics and history may be different than that in Europe but the sentiments and results are the same. 2. Spain did not decline after the expulsion of its jews. After the expulsion, Spain gained a worldwide empire that lasted several centuries. THAT decline had nothing to do with the jews. 3. Millions of jews left persecutions in tsarist Russia. After that, it morphed into the Soviet union, the biggest country in the world until it's breakup several decades later.

I don't believe a word of this and let me tell you why. The Arab mind has always suffered a kind of bizarre arrogance that flies in the face of reality. With few exceptions. When Napoleon landed in Egypt with a few thousand troops he was able to conquer the entirety of Egypt quickly not because they were technologically backwards or not immune to European diseases. They were simply unable to fathom the idea that anyone could ever master them in any way. They could not understand modern tactics or ways of fighting, they could not adapt and didn't want to. They simply saw the French troops and thought to themselves that Egypt and Islam would prevail because it is superior. In a modern vein, Moshe Dayan was once asked "Is the Israeli army the best ever?" He quipped "Who knows, we only fight Arabs." This is the heart of the matter. When Egyptian radio broadcast during the 6 day war that Israel was burning and the Jews were being cast into the sea, when they told the King of Jordan that absolute victory was hours away, they were talking as if they actually believed it. AND THEY DID. Their culture does not allow them to think of anything other than they are the supreme Lords of the planet, always have been always will be. Victory is guaranteed, no sort of reality is needed.

Davsil, you are right that hating Jews goes way back in Arab/Muslim history. Maimonides [Rambam] attested to that in his famous Epistle to Yemen back in the 12th or 13th century.
But Spain did decline intellectually after the expulsion of the Jews in 1492 and that of the Muslims many years later. Spain did build an empire but intellectually Spain lagged behind other European countries which is what many Spanish historians and intellectuals have written, such as Americo Castro.

Regarding Soviet Russia, millions of Jews remained there after the mass emigration of Jews before WW One, although hitler eventually had millions of them murdered in the Shoah.

A number of Arab writers and intellectuals believe that it was not so much the expulsion of the Jews [although that too in my view] that kept the Arabs back but Islam itself. This viewpoint is expressed in a number of Arab writings marking the death of Bernard Lewis.
https://www.memri.org/reports/arab-writers-renowned-historian-prof-bernard-lewis-1916-2018