What a Pakistani Muslim learnt from a Jew

A chance encounter with a Pakistani Jew in Israel leads Ibrahim Rashid to conclude that Israelis and Palestinians can never reconcile unless Muslim states come to terms with the disgraceful treatment of their Jews. Story in the Daily Times of Pakistan (But sadly, the comments show that many readers are still in denial):

On my first day in Jerusalem, I woke up, performed wudu (ablution) and donned a new shalwar kameez that my grandmother had sent from Pakistan.
I thought to myself, “Today, I am representing my culture, religion, and family – and I will do it with pride.”
As I boarded the bus for the Western Wall, the holiest site in Judaism, my driver asked, “Where are you from?”
“Pakistan!” I responded, to which he replied, “I’m from Pakistan, too!”
I was stunned to know that there were Pakistanis in Israel.
“What’s your name?” I asked in Urdu.
“Shimshon!” “Shimshon?” That’s an odd-sounding Pakistani name, I thought.
“How long have you been in Israel for?”
“Since 1957.” “Wow, that’s a while. When were you last in Pakistan?”“1957.” Confused, I asked him, “Why haven’t you gone back since?”
“Because I can’t – it’s not safe for me.”
In that moment it hit me. Shimshon is Jewish! I was shocked. I never imagined there could be Pakistani-Jews. 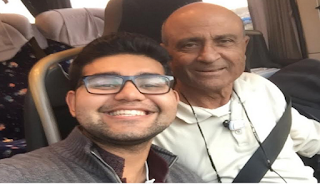 With Shimshon, Ibrahim Rashid's  Pakistani-Jewish bus driver on the way to the Western Wall

He spoke about growing up in Karachi – the city my family is from – and fearing for his life during his stay. He was harassed in the street, his synagogue was targeted and along with the rest of Karachi’s Jews, he had to flee to the only country that would take him, Israel.

As we parted ways and I made my way for the Wall, he was all I could think about. We come from the same land, speak the same language, and he could even pass for one of my relatives but because of his religion, our country failed him and now he’s in Israel, the only place where he feels safe.

From feeling pride in my heritage, I was overcome with shame. How can I be proud of my country when this is how we treat our minorities?
When you enter the Wall, you’re taken aback by its beauty. People are dancing, children are singing, and everyone, irrespective of faith or nationality, is vibrating as one. And that’s when I got it.
No matter how I feel about the Israeli-Palestinian conflict, upon witnessing the wall, I realised that Israel is a place where people like Shimshon can feel safe.

Read article in full
Posted by bataween at Thursday, June 14, 2018

What I don't understand is how a Pakistani can visit israel like it was second nature and then be allowed to write this kind of article in a Pakistani newspaper.

It is because he now lives in the US. All credit to the Pakistani newspaper for printing the piece.