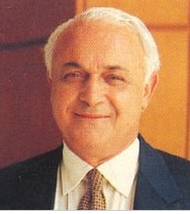 Assaraf was born in Rabat and worked with the royal counsellor Ahmed Reda Guedira when Morocco became independent. Founder of a research centre on Moroccan Jewry, he became president of the World Union of Jews from Morocco.

He was the author of several books on Moroccan Judaism and his 'Une certaine histoire des juifs du Maroc' is considered a classic. He was chairman of Radio Shalom and on the Board of the magazine Marianne.

He died in March 2018 in Ramat Sharon, Israel, where he spent his last years.