Too late to save Mosul's Christian and Jewish sites?

International efforts to rebuild Mosul after it was devastated by ISIS may come too little, too late. This article in the Kurdish medium Rudaw asks what will happen to Jewish and Christian sites, which are crumbling to dust. 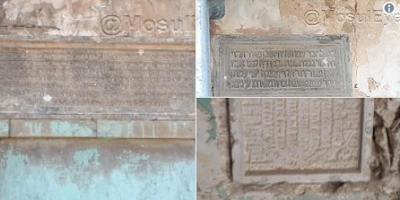 Inscriptions in Hebrew on what remains of Jewish homes in Mosul are quotes from the Bible or tributes to the son of the local Jewish Mukhtar, who financed the building

In 2014 ISIS blew up the Mosque of Nabi Younis, or the Prophet Jonah, where he is believed to have been entombed. ISIS said the mosque, which had previously been used as an Assyrian church, had become a place of apostasy and not of prayer.

The United Arab Emirates, Iraq, and UNESCO announced a $50 million partnership at the Iraqi reconstruction conference in February to rebuild "the cultural heritage of Mosul," as part of the 'Revive the Spirit of Mosul' programme.

"Education, culture and heritage will also be key elements for successful reconstruction. UNESCO's initiative to coordinate international efforts for the reconstruction of the Old City of Mosul deserves our full support," UN Secretary-General Antonio Guterres said at the time.


Mosul and its surrounding areas are historically some of the most diverse in the Middle East — at different times home to Babylonians, Assyrians, Jews, Arabs, Kurds, and other groups who have followed Abrahamic religions and other faiths like the Yezidis.

The conflict monitor Mosul Eye tweeted photos on Monday of engravings from the west or right bank of Mosul: "Anyone can read and translate the Hebrew inscription, please? One of the Jew's houses in old Mosul, unfortunately, it was destroyed by an airstrike, and this is what's left of it."


Yona Sabar, originally from Zakho in the Kurdistan Region of Iraq, is professor a emeritus at the University of California Los Angeles (UCLA) where he specializes in Hebrew and Aramaic in the department of Near Eastern Languages & Cultures. He told Rudaw English the inscriptions mostly come from Deuteronomy.

"The Lord shall command the blessing upon you in your barns, and in all that you set your hand unto... with long life, peace and success... May God bless you and open His good treasure for you ..." translated Sabar.

He revealed that one of the inscriptions reads: "May the name of Hakham (Rabbi) Yihya son of Meir Daddo, who donated this inscription in honor of his late father, be remembered for his good deeds."

A book written in Hebrew by Ezra Laniado in Haifa in 1981 details that Daddo was the mukhtar, or local representative, of Mosul's Jewish community during World War I.

The book explains that Daddo's son, Yihya, was very altruistic, including donating money to build the southern section of Sasson Synanogue in Mosul, which is where Sabar believes the inscriptions originated before being turned into a house.

Read article in full
Posted by bataween at Friday, June 22, 2018