Story on missing Syrian Judaica is 'inaccurate and confused'

With thanks: Boruch, Lily


The veracity of an article by the Associated Press alleging that  Jewish artefacts have gone missing from the Syrian synagogue of Jobar has been lambasted as 'conflated, inaccurate and confused.' The story is not in fact new and is once again dependent upon an anonymous source by the name of Al-Dimashqi.

"The main missing cache, they say, contained torahs written on gazelle leather as well as tapestries and chandeliers, and was given to a militia by a local council for safekeeping when rebels surrendered the neighborhood to government forces earlier this year. That group, the Islamist-inspired Failaq al-Rahman brigade, later said that it was not in possession of the items after the council arrived at a new rebel base in Syria’s north after evacuating earlier this year.
Another set of objects appears to have been stolen by a Syrian guardian entrusted by the local council to hide the items in his home. The man, who officials involved declined to name, disappeared with the artifacts in 2014 before some allegedly resurfaced in Turkey." 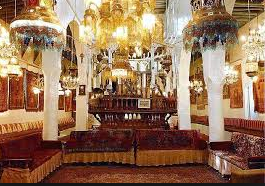 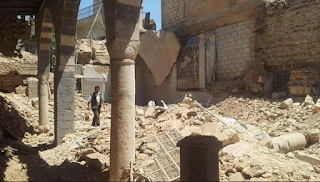 Adam Blitz, an anthropologist and expert in ancient Syrian synagogues, speaking by 'phone, was quick to point out the broader context of news coverage and to highlight reports from the BBC of deliberate cyber propaganda by the regime, notably at times of regime offensives. This is the case today, with the regime focusing not on the Ghouta, but the south.  'Cultural heritage has been weaponised and disseminated across mainstream and social media,' Blitz claims. Jewish heritage is a political football, with the regime and rebels accusing each other of the bombardment and theft of antiquities.

Predictably, an article has appeared in the Iranian press repeating many of the AP allegations and misconceptions.

There is indeed much trafficking of artefacts in Turkey but the Judaica mostly turn out to have been crude fakes . Jewish activists have been determined to 'rescue' endangered artefacts and smuggle them out of Syria, itself a crime, as Blitz notes.  At least two Torah scrolls have resurfaced, not in Israel, as the article alleges, but in the US, and have been publically re-dedicated.

The Jobar synagogue, which is dedicated to the prophet Elijah, was routinely bombed by regime forces for several years during rebel occupation and finally succumbed on 23 May 2014. Only a few structural pillars remain standing in the rubble. The synagogue does not date back to Biblical times, as is often claimed by the media, but is most likely medieval, according to Blitz, based on literary evidence, where archaeology is of little assistance.

The AP article makes other overstatements. Syria was never home to the largest Jewish population in the Middle East. No more than 12,000 Jews lived in  Damascus at the turn of the 20th century, according to Blitz, who also refers to the Ottoman census.

Prior to the civil war, the Assad regime had a relatively good record for preserving Jewish heritage and has protected the few Jews still living in Damascus and the synagogues of the Old City. This is not to say that there has not been state-sponsored antisemitism, however.