Stop Algeria claiming Jewish heritage as its own!

On 31 July 2018, The Cultural Property Advisory Committee in the US will meet to review Algeria’s request for US import restrictions on archaeological and ethnological material. On the surface, a country cannot be faulted for wanting to safeguard its archaeological and cultural heritage. But every Memorandum of Understanding (MOU) signed between the US and Arab countries legitimises the appropriation of moveable Jewish heritage - scrolls, documents, artefacts - seized by Arab governments from their expelled and dispossessed Jewish communities. The best example of this is the Iraqi-Jewish archive: a campaign has been underway to stop the archive from returning to Iraq. But this case is just a symptom of a much larger picture of abuse, argues JIMENA. 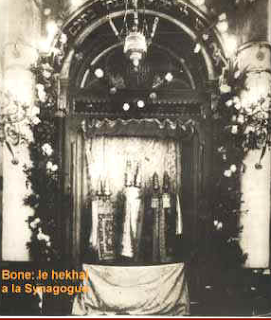 Torah scrolls in the ark at the Bone (now Annaba) synagogue

Unfortunately, the Iraqi Jewish Archive case is only one of several instances where our American Government has signed agreements recognizing Arab governments’ seizures of Jewish property. Our government has been signing Memorandums of Understanding (MOUs) – agreements between the US and foreign governments that blockade the entry of art and cultural property to the USA and deny Jews from Arab countries the rights to their historic heritage.  The signing of MOUs with Middle Eastern countries validates those countries’ confiscation of Jewish property and heritage and simultaneously denies the rights of Jews and other religious minorities to their cultural patrimony.

The signing of the MOUs is done under the auspices of The Cultural Property Implementation Act (CPIA). This law provides for the US to enter into agreements with foreign nations to temporarily restrict the import of “significant” cultural items as part of a multi-nation effort to deter looting of ancient archeological sites. Over time the State Department has broadened the scope of the law to provide for “near permanent” bans on the import of ALL cultural items to the present time. The MOUs recognize those nation’s claims and seizures of all cultural property, including the personal property of individuals and the communal property of religious and ethnic groups.

The MOUs are based on a flawed premise – that Jewish cultural property constitutes the national heritage of Arab governments. In fact, Jewish cultural property in Arab countries was expropriated from private homes, schools, and synagogues. It is the heritage and patrimony of 850,000 indigenous Jewish refugees who were ethnically cleansed and fled their homes and property under duress. Jewish patrimony was never the property or national heritage of Arab governments – in fact most Arab governments have done little to preserve the remnants or memory of Jewish history in the countries. Today Jewish communities from Arab countries and their descendants live outside of the Arab world and most are restricted from entering their countries of origin.


Examples of these MOUs include:
Algeria: ACTION REQUIRED NOW! – Following the lead of Yemen, the Algerian government has recently requested an MOU from the State Department.  The open session of the Cultural Property Advisory Committee will be held on July 31, 2018, at 10:30 a.m. (EDT). It will last approximately an hour and a half.  Members of the public and press will participate electronically. If you wish to make comments you must do so no later than July 15, 2018. More information on how to participate and submit comments can be found by clicking here
Egypt: The U.S. MOU with Egypt, signed in November, 2016, covers virtually all objects of cultural heritage dating from the Predynastic period (5,200 B.C.) through 1517 A.D, including Hebrew “scrolls, books, manuscripts, and documents, including religious, ceremonial, literary, and administrative texts.”
Libya: On February 23, 2018, the US Department of State signed an MOU with Libya to restrict importation of objects of ‘Libyan cultural heritage’ including items owned by the ethnically-cleansed Libyan Jewish community.
Syria: The 2016  designated list of import restrictions from Syria includes “[t]orahs and portions thereof” and “Jewish paintings [which] may include iconography such as menorahs,” and “religious, ceremonial, literary, and administrative material,” including but not limited to  maps, archival materials, photographs, and other rare or important documentary or historical evidence.”
Yemen:  On January 31, the International Committee of Museums announced the release of a Red List for Yemen, which targets Hebrew manuscripts and Torahs, while reaffirming the Yemeni government claims to Jewish property.  Frequently, issuing a State Department funded Red List is the first step in a campaign to smooth the way for an MOU.
The aforementioned nations either ethnically cleansed, expelled or terrorized their ancient Jewish communities into flight and seized their property.  Under UN Resolution 242,  Jews fleeing Arab countries were bona fide refugees yet today, these nations claim private and communal Jewish property as their own heritage through cultural patrimony laws. Unfortunately, US government agreements effectively endorse these seizures of Jewish property.

No further agreement should be made with a state where Jews were subjected to state-sanctioned Anti-Semitism, Nuremberg like laws and ethnic-cleansing. No persecuting nation can lay claim to the legacy of a proud and ancient Jewish community. Moreover, the annual State Department Human Rights Report annually reports violations of the Universal Declaration of Human Rights; and that Report must include violations of the Declaration’s Article 17.  Article 17 states that no individual or community should be arbitrarily deprived of their property. Therefore, the United States should not enter into any agreement, and should withdraw from any existing agreement, with a with a foreign state that either condones, supports or promotes any Article 17 violation by that state.

These MOUs claim to be about looting, but their broad scope and limited evidence of success suggests their real impact is providing a legal vehicle to legitimize foreign confiscations and wrongful ownership claims. Legitimate efforts to curb looting are essential, but they must be targeted to preserve archaeological resources, and not to disguise the brazen property confiscations of tyrants.

The US must stop returning stolen property to Arab states