My grandfather practised Judaism in secret

Shirley tells the story of her family to Daisy Abboudi, who runs Tales of Jewish Sudan, a website dedicated to the Jews of the Sudan. These numbered around 1,000  at their peak; the community is today extinct. Shirley's grandfather was forced to convert to Islam by the fundamentalist Mahdi in the 1880s but continued to practise Judaism in secret. He eventually became president of the Jewish community. 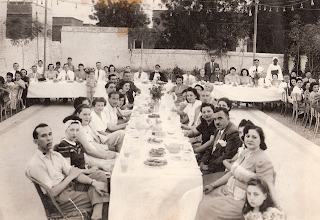 My grandfather Moshe, they called him Mousa, was the first who built the community in Sudan.  Originally they were Spanish, and then from Spain they went to Turkey, and then from Turkey they came to Israel, at that time it was Palestine, they came to Hebron.  From there they went to Sudan, that was in 1842.  After that there was the Mahdi and so on.  There were very few Jews then, about three families all together. They were compelled to be Muslims, my grandfather remained Jewish, but he didn't do it openly.  He used to go to his house and to pray and to put on his tefillin and everything, but outside they thought he was Muslim.  They gave him the name - his name was Moshe Ben Zion Koshti - so they gave him the name 'Bassiouni'.  I don't remember him because he died in 1917, a very long time ago!

My grandparents were well-known; my grandfather was the president of the Jewish community until he died in 1917.  He also erected the first synagogue in Sudan a few years before he died in Omdurman.  He made a cemetery too for the Jews in Omdurman and he and my grandmother are buried there. My grandfather also sent for a Rabbi from Egypt to convert my grandmother to Judaism before she gave birth to the children, and this Rabbi also circumcised his first son.  He had four children and my mother is the second one.

My grandmother was very...she didn't study at all...but she was very wise.  She lived with us at home - with my mother and father, and she died around the age of seventy.  She wasn't born Jewish, she was a Copt, but the Mahdi forced everybody to marry again when he made them all convert.  My grandfather already had a wife from Turkey, her name was Bechora and she was Jewish, but he had to marry my grandmother.  The other wife was living at the same house but she died a few years after and she was also buried there in Sudan.

Email ThisBlogThis!Share to TwitterShare to FacebookShare to Pinterest
Labels: Jews of Sudan, Testimonies

Shirley makes the regrettable error of thinking that the Land of Israel was "palestine" in 1842 or before. Actually, the traditional Arab and Muslim geography saw the country as an indistinct part of bilad ash-Sham [Syria or Greater Syria]. The Ottoman Empire never made Israel a separate district or province. Instead it was divided into districts [sanjaqs] subordinated to the wilaya of Damascus [Sham] until after the Crimean War in the 1850s. But the Ottoman state never called the country or any part of it "palestine" or "filastin" until the empire fell apart in the wake of WW One.

Just by the way, the main reason for the Mahdi's revolt was that the British tried to suppress the slave raiding and slave trade by the Arab/Muslims of Sudan against their non-Muslim neighbors. This not widely enough known.