Morocco trains up its own 'tolerant' imams

To counter the Wahabist influence in the mosques, Morocco is training imams (and female imams) in a moderate, 'tolerant 'version of Islam, and 'exporting' them to France. Story by Irina Tsukerman in the Algemeiner (With thanks: Michelle): 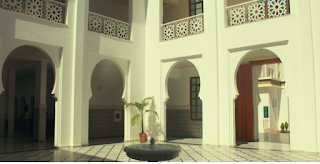 So far, Morocco’s approach to countering religious extremism has been successful: the country has not had a terrorist attack since 2011.

The three-pronged approach relies on surveillance of mosques, social integration and outreach, and education. The education of male and female imams ensures both the study of substantive theology interpreted in a moderate and tolerant way, which has been central to Morocco’s thousands of years of interreligious and interethnic coexistence.

This education is combined with other disciplines that complement the religious courses and expand the worldviews of the students. For instance, the Institute particularly encourages female imams, with the reasoning that they will then reach out to and educate other women in their communities and countries, thus combating the spread of extremism in countries where literacy is low, and women are frequently marginalized and easily manipulated  by poorly regulated religious authorities.

There are three tracks for all the students at the Institute — a year-long track for Moroccans, and 2/3 year tracks for other African and French students, who face tough competition and require nomination by a community or an organization to be considered for the program.

Read article in full
Posted by bataween at Monday, June 04, 2018