Donations from the UK, Israel and France among others have enabled JPress (part of the National Library of Jerusalem) to digitise issues of the Egyptian-Jewish newspaper L'Aurore. What is remarkable about this newspaper  - a treasure trove of data about the interwar Jewish community in Egypt, edited until its demise in 1941 by Jacques Maleh - is that it continued to publish articles sympathetic to Zionism and to refugees from, and victims of, Nazi antisemitism. Here is a synopsis of the history of L'Aurore by Ovadia Yerushalmi. (With thanks: Maurice) 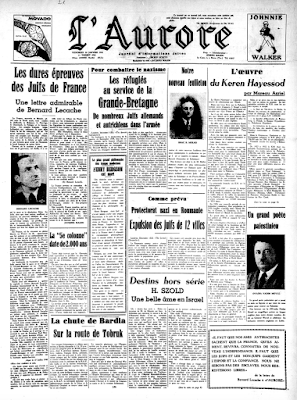 Issue of 10 January 1941: until its demise the newspaper continued to publish articles about Zionism and the victims of Nazism.

The weekly newspaper L'AURORE was founded in 1909 by Lucien Sciutto in Istanbul, Turkey. In 1919 it was shut down either by government pressure or, as rumors had it, due to economic difficulties that followed Sciutto’s clashes with the local Jewish community. In 1921 Sciutto moved to Cairo. Three years later, in 1924, under pressure from his devoted readers who considered L'AURORE to be a means of expressing their liberal views in French, Sciutto started publishing the magazine again, in Cairo,  in its original name and format.

The reborn Weekly had a great success among Jewish readers of Greek and Turkish descent in Egypt. It became a significant competitor to the weekly ISRAEL.

At that time L'AURORE housed the Cairo agency of the United Palestine Appeal (UPA) in its offices. Consequently, from October 1924 onwards the UPA headquarters in London supported the magazine by paying 10 Pounds Sterling per month – a sum that was equal to an apartment’s  monthly rental charge. This support lasted till June 1931. Ensuing this date the Weekly started encountering economic difficulties and on two occasions its publication was halted. In July 1931 Jacques Maleh, Sciutto’s partner, took over and for a few months tried to publish the magazine at his own expense. However, as Maleh’s debts piled he had to ask for help. He found it in the B'nai B'rith organization whose members teamed up to save the magazine. They founded a committee, headed by Simon Mani, with the goal of revitalizing the magazine. With the guarantees that were provided by Léon Bassane and M. Markovitz,  who were members of the committee, Maleh managed to improve the magazine’s image and status within the community. L'AURORE became independent and successful. It was only in 1941, as a result of the economic consequences of World War II, that the magazine was closed for ever.

Like the magazine ISRAEL, L’AURORE defined itself as a Jewish National publication and presented succinct pro Zionist inclinations. Sciutto was outraged at the indifference of most of the Jewish community, including its religious and institutions’ leaders, who shunned from taking part in the Zionist effort to establish the National Home. In 1925, when Baron Jacques de Menasce was elected the head of the Zionist board in Alexandria, Sciutto urged the wealthy in Cairo to follow the Alexandrian example.

L’AURORE was the first Jewish magazine to struggle against the Nazi regime. Already in 1933 it alerted its readers of the Nazi movement that had just risen to power. L’AURORE published an open letter to Egypt’s Acting Prime Minister demanding to outlaw the Nazi party in Cairo and to expel its leaders. The magazine warned the world from the consequences of the Nazi ascend  to power. In fact L’AURORE became the voice of the “Contra Anti-Semitism League” in Cairo.

Lucien Sciutto was a Zionist activist, a journalist, an author and educator. After his departure from the magazine he devoted himself to teaching French in high-schools and in 1941he became a principal of a Jewish school in Alexandria.