Jewish refugees the antidote to the 'right of return'

If there is one thing that the “Great March of Return”—the ongoing campaign since 30 March to break through the fence into Israel from Gaza—has taught us, it’s that the “right of return” remains the overriding objective of the Palestinians.  Jewish refugees could be its antidote, argues Lyn Julius in JNS News.

The “right of return” cannot be dismissed as meaningless rhetoric. This form of “demographic subversion” remains the single biggest stumbling block to peace, if not a recipe for continuing bloodshed. Even so-called Fatah “moderates” will not give up their “right” to Arabize Israel by flooding it with the millions of descendants of Palestinians, who, under the aegis of the UNWRA, are uniquely permitted to pass on their refugee status from generation to generation.

In 2009, Omar Barghouti (the founder of the Boycott, Divestment and Sanctions movement), told The Electronic Intifada that “people fighting for refugee rights like I am know that you cannot reconcile the ‘right of return’ for refugees with a two-state solution. That is the big white elephant in the room, and people are ignoring it.” The Palestinians re-iterate this demand at every turn, but the West remains deaf to it, pretending that what the Palestinians really want is an end to the Gaza blockade, self-determination in the West Bank and humanitarian aid.
As long as the “right of return” is the cornerstone of the Palestinians’ strategy, the Jewish refugees who fled from Arab lands to Israel in roughly comparable numbers remain its antidote. 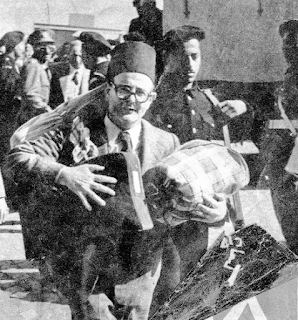 It is a fact, however, that both refugee populations were created by the Arab countries’ belligerent refusal to accept the 1947 U.N. Partition Plan; both groups became refugees during the same period in history; and both were declared to be bona fide refugees, under international law, by the appropriate U.N. agencies: the U.N. High Commission for Refugees (UNHCR) and the U.N. Works and Relief Agency (UNRWA).

The common objection to the Jewish refugee issue—that the Palestinians had nothing to do with it—is an easily demonstrable fallacy. In 1948, seven Arab states declared war against Israel. However, an extremist Palestinian leadership—the wartime Mufti Haj Amin al-Husseini collaborated with the Nazis and incited anti-Jewish hatred all over the Arab world in the decades preceding the creation of Israel—played an active part in all Arab League decision-making and dragged Arab states into conflict with the new Jewish state. It was a conflict they lost and whose consequences they must suffer. The Palestinians cannot escape some measure of responsibility for both the Arab and the Jewish nakbas (“catastrophes”).

Linkage between the two sets of refugees opens up a window of opportunity for a political accommodation. A “right of return” for Palestinian Arab refugees to Israel—a state where they were not citizens—is a concept non-existent in international law. It is, in any case, a non-starter, for it promises nothing but upheaval and strife between Arabs returning to 1948 Israel and resident Israeli Jews. A “right of return” for one set of refugees is morally untenable; it is not equitable to give one set such a right without giving the same right to the other. Apart from the chaos and turmoil it would generate, giving Jews from the Arab world a “right of return” to countries that spat out them out is like asking a prisoner who has tasted freedom to go back to jail. “The masts of our ships are broken, our sails are torn,” said the late Baghdad-born Professor Shmuel Moreh, poetically. “Iraq is no place for us. If the Muslims are slaughtering their brothers, how can we return?”

Three generations of Jews have now been resettled in Israel and the West after their painful uprooting. No Jew would wish to return to an Arab country in present circumstances, except perhaps as a tourist, unless they are Jews who, in 1948, lost their homes in Jerusalem and areas that have fallen under Israeli control and are seeking restitution. The key to peace is therefore to recognize that the exchange of refugees is permanent and irreversible.

One might argue that no comparison between the two groups of refugees is possible; after all, one problem has ostensibly been resolved, while the other has not. It’s hard to justify a position that defends the non-resettlement of Palestinian refugees—an abuse of their human rights. The biggest obstacle to their absorption is the existence of the UNWRA, the U.N. agency dedicated to perpetuating refugee status through the generations. It is extraordinary and concerning that UNWRA should attract one-third of the budget for the UNHCR—the agency that deals with all refugees globally, excluding Palestinians—and that it should have four times the number of staff. It is a cause for alarm that UNWRA indoctrinates its young Palestinian charges with the idea that they are temporarily living in Gaza until they are able to return to Israel proper—a country the vast majority of “refugees” has never seen.

Israel should not be penalized for “doing the right thing” by absorbing its Jewish refugees. Palestinian Arab refugees need to follow the model of successful Jewish refugee resettlement by being allowed to acquire full citizenship in a future Palestinian state or in their host Arab countries. This is, sadly, a right that the Palestinian leadership has, to date, declared no intention of granting them.

Lyn Julius is the author of “Uprooted: How 3,000 Years of Jewish Civilization in the Arab World Vanished Overnight.”