Israelis have been cheering the teams of their ancestral countries  in the World Cup, Al-Monitor reports:

Fans of the Iranian soccer team leaped out of their seats cheering wildly and waving Iranian flags when Saeid Ezatolahi thumped the ball into the back of the net in Wednesday's World Cup game against Spain, tying the game 1-1 and leaving Iran a chance to advance. A moment later, groans of disappointment spread as the goal was disqualified. 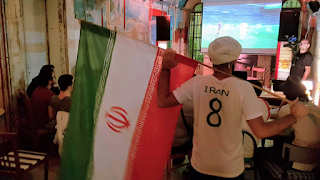 The scene during a televised match in a cafe in Jerusalem (photo: Ilan Ben Zion)

This scene did not take place in Tehran or at the stadium in Kazan, Russia. It was in a bar in Jerusalem, where the fans were mostly Israelis expressing their shock and disappointment at Iran’s defeat.

Geopolitics set aside, many Israeli Jews are rooting for Muslim countries in this year’s World Cup, including Israel’s archrival Iran. The Israeli national team has only competed in one World Cup, in 1970, leaving local soccer fans to root for other teams when the quadrennial event rolls around.

This year, Iran and four Arab states — Saudi Arabia, Tunisia, Morocco and Egypt — are competing in the World Cup in Russia. This rare showing of countries from the Muslim world, from which a large percentage of Israelis immigrated in the 20th century, has prompted many in Israel to cheer on the teams of their ancestral countries. As of 2011, Israel was home to 141,000 Jews of Iranian descent, 492,000 Jews of Moroccan descent, 134,000 of Tunisian and Algerian descent, and 57,000 of Egyptian origin, according to figures from the Central Bureau of Statistics.

By contrast a man draped in an Israeli flag was pursued by Tunisian fans in Moscow shouting 'Palestine'. The story that Moroccan fans tried to snatch an Israeli flag has proved false. JTA story here.

Wow! This has really touched my heart!