Albert Levy is amazed at the ignorance of Israeli intellectuals about the history of Jews in Arab countries. Article in the Jerusalem Post: 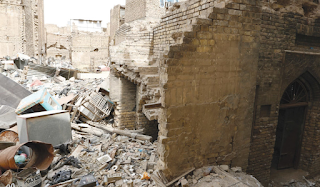 I am amazed every time anew when I speak with an Israeli intellectual who tells me, “Jews received very good treatment in Arab states, they were well off there.”

This statement does not at all reflect the historical reality of Arab states that had significant Jewish population, that is: Morocco, Algeria, Tunisia, Libya, Egypt, Syria, Iraq, Yemen, and Iran (Muslim, but not Arab, State), from which about 1,020,000 Jews left between 1945 and 1975. For the most part, they were forced to leave and lost all of their belongings at best. In the worst case, they were murdered.

Many Arab states succeeded where Hitler failed in Nazi Germany: they are truly “Judenrein,” that is, “clean” of any Jews. Today there are no Jews in Egypt, Syria, Iraq, Yemen, and more. And also not in… the Palestinian Authority’s administered territories! Mahmoud Abbas declared in 2013, “In a permanent agreement there will not be the presence of one Israeli upon our lands, citizen or soldier.”

When Abbas says, “Israeli,” he means “Jew.” Because the Arabs with Israeli citizenship freely enter and leave the PA without endangering themselves with being lynched – which is the traditional hospitality for Jewish guests.

In Islamic States before 1945, up until the period of Western colonization, the Jews lived under the painful and humiliating yoke of “dhimma.”

The Israeli intellectual asks me, “What’s dhimma?” After giving him an improvised history lesson, I add a quick lesson in Islamic theology and explain that dhimma is the status of dhimmis – the people of the book, Jews and Christians – in an Islamic State.

This Islamic ruling determines that dhimmis must always be humiliated and exploited habitants through a long list of obligations and prohibitions.