Moqtada al-Sadr’s Sairoon (On the Move) Alliance party narrowly won the majority of parliamentary seats in Iraq’s recent elections. Not for the first time (back in 2012/13), he has said he would welcome the return of Iraq's Jews, more evidence of 'pie-in-the-sky' thinking without acknowledgement of the wrongs done to this community. Report on the MEMO (Muslim Brotherhood) site (with thanks: Lily): 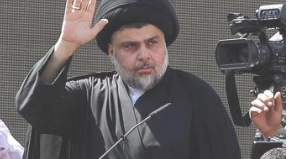 Leader of Iraq Sadrist movement, Muqtada Al-Sadr (pictured), has welcomed the return of Iraqi Jews who immigrated from the country after 1948.
Answering a question from one of his supporters about the possibility of allowing Iraqi Jews who had been displaced from Iraq to return, Al-Sadr said: “If their loyalty is to Iraq then welcome.”
Jews represented more than two per cent of the Iraqi population before 1947 but the figure dramatically decreased in 1951 after many emigrating to the newly formed state of Israel.

Baghdad-born poet Someck is not 'in exile' in Israel
Posted by bataween at Wednesday, June 06, 2018