Iraq beauty queen in Israel: 'people looked like my people'

An Iraqi beauty queen has made history by visiting Israel at the invitation of the American Jewish Committee. In one respect, Sarah Idan's visit is in keeping with the growing interest and sympathy that Iraq's youth and middle classes have been showing towards Iraqi Jews. In another respect, it is a sign of how hostile Iraq remains towards 'normalisation' with Israel: Sarah and her family were forced to flee Iraq for the US after receiving death threats. (with thanks: Michelle)

Iraqi-born beauty queen Sarah Idan -- whose selfie and unlikely friendship with Miss Israel Adar Gandelsman during the 2017 Miss Universe pageant earned her family death threats and forced them to flee their native country -- made an extraordinary visit to Israel where she was praised for her bravery and message of peace.

A Hadashot television news report which followed Miss Iraq on a tour of Jerusalem’s iconic Machne Yehuda market showed the 26-year-old being showered with praise by Israeli fans.

One woman thanked Idan “for being so brave” calling her “an inspiration to all the women in the world.”

Another Israeli woman, of Jewish-Iraqi descent, told Idan she hopes one day to return to Iraq to which Idan replied “Inshallah,” or God willing. 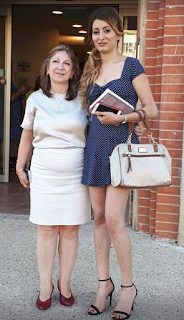 Sarah Idan (right) with Lily shor, manager of the Babylonian Jewry Heritage Museum during a visit to Or Yehuda. She was touched to see an exhibit explaining that Iraqi Jews could not return

“It actually felt weird — the people look like my people. And the city looks like Damascus, like Syria, and I’ve been there, so everything seems familiar to me,” Idan said of her visit to Jerusalem.

Idan, who lives in the United States, withstood a torrent of backlash in 2017 after she posted a selfie with Gandelsman with the caption "Peace and Love from Miss Iraq and Miss Israel".

Idan’s family was forced to flee Iraq after receiving death threats over the selfie as well as photos of her modeling in a bikini. Idan told Hadashot that she was surprised by the backlash sparked by the viral photo.

“I did not think it would blow up like this when I took this picture,” she said. “I lived for many years in the US, I have many friends who are Jewish or Israeli, I don’t think about people like that.”

More on relations between Iraq and Israel
Posted by bataween at Friday, June 15, 2018

Brave brave person. I wish her all the success in life. One thing though. Isn't "idan" a Hebrew name? As in "idan raichel"?