How Yemenite singers changed the face of Israel's music

In the wake of Israel's Eurovision victory with Toy by Netta Barzilai, The Tablet has been running a series about the stories behind some of Israel's most famous tunes, many of them performed by Yemenite singers like Izhar Cohen and Zohar Argov. (With thanks: Shulamit, Michelle) 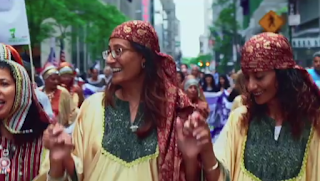 Yemenite Jews in traditional costume participate as part of the American Sephardi Federation contingent in the Israel 70 parade in Manhattan on 8 June. To see video by Zakaria Siraj, click here.

In Israel today, Mizrahi, or “Eastern,” music is ubiquitous. In fact, to many it is practically synonymous with Israeli music. But that wasn’t always the case. For decades, Israeli radio stations exclusively played tunes rooted in Ashkenazi traditions. That began to change in the 1970s and early ’80s, due in no small part to a few veritable trailblazers.

Prologue: “A Mona Lisa Called Abanibi.” Exactly 40 years before Netta Barzilai’s feminist hymn “Toy” won the Eurovision Song Contest and propelled thousands of fully clothed Israelis to jump into the pool in Tel Aviv’s Rabin Square, another Israeli youngster conquered Europe with a set of bizarre utterances. He was skinny, had dark skin, black curly hair, and a million-dollar smile. His name was Izhar Cohen. Mishy Harman brings the story of the ongoing love affair between Israel and the Olympics of cheesy pop melodies.

Act 1: “The Flower of My Garden.” You may never have heard of Zohar Argov, but to Israelis he’s a kind of mix between Elvis Presley, Amy Winehouse, and Billie Holiday. “The King,” as he was called, forever changed the face of Israeli music. But he also paid for it with his life.

Listen to the full episode here, or download it from iTunes. You can hear all of Israel Story’s episodes in English here and in Hebrew here.

Read article in full
Posted by bataween at Sunday, June 10, 2018

Credit should be given to Yemeni Jewish composers in Israel such as Boaz Sharabi, Avihu Medina, and others.