Is Yad Vashem rewriting history? Changes at the world's premier Holocaust museum in Jerusalem seem to be suggesting that it is seeking to downplay the links between Adolf Hitler and the Palestinian leadership during World War II. As a result, fewer visitors to Yad Vashem will learn of the Arab role in the Holocaust. 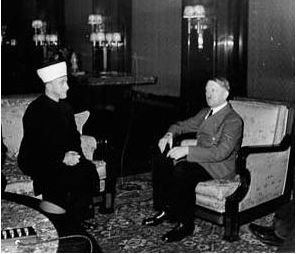 Infamous meeting between Haj Amin al-Husseini and Adolf Hitler in November 1941: the photo has been taken down

A veteran Israeli tour guide, Shalom Pollack, has noticed that a floor-to-ceiling photo of the infamous meeting between Hitler and the Mufti of Jerusalem has been replaced by a tiny photo of the Mufti with Himmler."Many structural and technical innovations have upgraded the visiting experience," he says.
"However, one very glaring content change has caught my eye now for a while and it leaves me no rest."

When Pollack complained, he was told that the new museum 'concentrates on the victims rather than the perpetrators, and therefore does not offer much space to them.'

However, Pollack points out, there is  a full wall of very large photos of German perpetrators just a few steps away from the Mufti-Himmler one.

"I assume that it was decided to tone down and hide the Arab (Palestinian) role due to the post-Oslo attitude and policies of building bridges with our new peace partners," Pollack complained in a letter to Avner Shalev, the Yad Vashem director.

"There are rumours that our popular peace partner, Faisal Hussaini himself, insisted that his uncle's photo be removed from the museum.
In any case, it is deeply disturbing and a national tragedy that a new generation of visitors, Jew and non-Jew, are not educated to a very basic and significant part of the Holocaust."

Individuals such as Edwin Black, author of Farhud, and the late Professor Shmuel Moreh have been campaigning for Holocaust Museums worldwide to  feature the Arab-Nazi alliance in their displays. It has been an uphill struggle.

Readers of Point of No Return are urged to write to Avner Shalev, demanding that the situation be rectified at once. Email: avner.shalev@yadvashem.org.il.

It was notorious Haaretz jounalist Tom Segev who first suggested that Yad Vashem "play down" the activities of Husseini during WW2. Just a few weeks ago the PLO held a conference in Ramallah where President of the Palestinian authority Mahmoud Abbas, a lifelong Holocaust denier, claimed that Jewish usury was the cause of anti-Jewish persecution in Europe. The conference decorations featured in place of honour the visage of none other than Amin al Husseini.

Revisionism at Yad Vadhem ? Is nothing sacred ?