The figures of Jews driven from Arab lands are staggering, yes this massive act of 'ethnic cleansing' has gone relatively unremarked, asserts Bob Lowe in his Standpoint (May 2018) review of Uprooted by Lyn Julius. 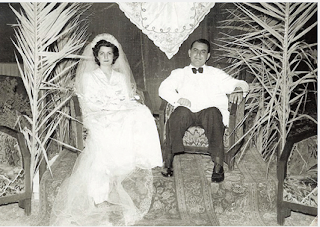 Iraqi-Jewish wedding in the 1940s

A Jew in Baghdad in 1948 was unwise enough to wear his expensive wristwatch when walking in the street. Spotting this, a policeman approached him and asked him the time. Ascertaining that the man was Jewish, he confiscated the watch and arrested him. In court the policeman told the judge that the watch contained a wireless on which the Jew was transmitting secrets to the Zionists in Palestine, then on the verge of becoming Israel. The judge sent the Jew to prison and gave the watch to the policeman as a reward.

The story, recounted by Lyn Julius in her authoritative history of the decline and virtual end of Jewish life in the Arab world, neatly encapsulates the situation of Iraq’s Jewish community, then numbering around 150,000 people. Although the Jews had been an integral part of Iraqi life for thousands of years, their time was coming to an end. Yet only a few years earlier, they had been enjoying a relatively golden age in Iraq, under the British mandate, which had begun in 1917. They made up about a third of Baghdad’s population, dominated trade and the civil service and played a big role in cultural life.

It didn’t last. A pro-Nazi movement developed, promoted and financed by the German ambassador, and the Arab uprising in Palestine of 1936 led to attacks on synagogues and individuals, often fatal. Things got steadily worse until the birth of Israel in 1948, when Zionism was added to the penal code, Jews were prohibited from leaving the country and the slightest evidence of a connection to Israel — even the star of David on a prayer shawl — could lead to arrest. A thousand Jews a month fled illegally, via Iran, while others registered their wish to leave.

By 1951, 119,000 of the remaining 140,000 had registered to go and were eventually allowed to do so, though they could take little with them: their property was frozen by decree in March 1951. Truly, by the waters of Babylon they sat down and wept. The remembrance of Zion was all they had left. Many of them did make it to the modern Zion, the new state of Israel, where most eventually prospered despite the shock of finding themselves destitute refugees living in tents, a bitter blow after the comfortable lives they had led in Iraq. Not all the Iraqi Jews went to Israel: they scattered all over the world.

Lyn Julius’s own parents, newly married, fled from Iraq in 1950 for London. At one stage her mother had brothers in Iran and Canada, and sisters in France and the US, while another sister stayed in Iraq until 1991. One of her father’s sisters also got out but, widowed young, returned to Iraq in 1964 to sell some property. She was trapped there for six years, until smuggled out by Kurds via Iran disguised as a Muslim. The descendants of Iraqi Jews, like the Saatchi brothers, have made a huge contribution to the countries in which they have settled, out of all proportion to their numbers. If only Iraq had them now: but by 2016 only five Jews still lived there, the end of a 3,000-year epoch of Jewish life in Babylonia during which the community had at times been the glory of the Jewish world.

But Iraq was not the only Arab country to persecute and expel its Jews in the 20th century. The same thing happened in Egypt, Yemen, Syria, Morocco, Libya, Tunisia and Algeria, detailed in forensic detail by Lyn Julius. The figures are staggering: in the last 60 years, more than 99 per cent of the Arab world’s Jews fled — nearly a million people, 650,000 of whom went to Israel, the rest to the West. This huge rescue operation was carried out by Israel and the wider Jewish — largely American — world.

Yet this massive act of, in modern parlance, ethnic cleansing has gone relatively unremarked by the rest of the world, fixated as it is on the Palestinian cause. The difference is instructive: the Jews got on with rebuilding their lives in unfamiliar lands while the Palestinians have become perpetual welfare claimants living off the misguided generosity of the West.

Lyn Julius concludes her absorbing book with the attempt — surely futile — of some descendants to claim compensation for their families’ confiscated and stolen property in Arab countries, and she tells one amusing story in this context. When Jehan Sadat, the widow of former Egyptian President Anwar Sadat, visited New York to give a speech, she met a member of the wealthy Castro family who had been expelled from Egypt by Nasser in 1956. Urging her to revisit Egypt with her children, Mrs Sadat added the traditional Egyptian courtesy, “My house is your house,” unaware that this was literally true: the Castros’ confiscated home had become the presidential villa. It is one of the few lighter moments in a book which tells a sombre and frequently tragic story. It does, however, have an uplifting outcome in the successful resettlement of an endlessly resourceful people: the Arab world’s loss is the wider world’s gain.