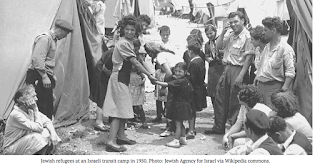 The photo used by BDS shows Jewish, not Arab refugees.

The group’s gaffe was mocked by several commentators on Twitter, one of whom sarcastically wrote, “Thank you Cosatu for bringing to the world attention the plight of Jewish refugees exiled from their homes in the 40’s and 50’s. Truly doing good work!!”

The issue of Palestinian refugees dates back to the 1948 Arab-Israeli War, when five Arab armies invaded the Jewish state less than a day after it declared independence. Some 750,000 Palestinians left or were expelled from their homes during the fighting, and they and their descendants are today considered refugees.
That year also saw the beginning of an exodus of an estimated 850,000 Jews from across the greater Middle East, whose communities were targeted with antisemitic pogroms and discriminatory laws following Israel’s creation. A majority of the refugees — hailing from countries including Iraq, Algeria, Tunisia, Syria, Egypt, Yemen, Morocco, and Libya — were resettled in Israel, where their descendants now make up half of the Jewish population. Others made their way to the United States and Europe.

Yet the issue of Palestinian refugees — which today number over five million, according to the United Nations — remains unsolved, and their “right of return” to Israel is a central tenant of the BDS campaign.

"an estimated 850,000 Jews from across the greater Middle East, whose communities were targeted with antisemitic pogroms and discriminatory laws following Israel’s creation"

This claim is incorrect. Jews in Arab/Muslim lands suffered pogroms before Israel's creation, such as the 1941 Farhud in Bagdad and other pogroms in Libya, Egypt, etc right after WW2 or in some cases during the war in North Africa.

Thanks, Bataween. I really should add that these pogroms as well as Arab/Muslim discriminatory laws not only predate the rise of the modern State of Israel but they long predate the 20th century.

The actual numbers of Arabs who left during the War for Independence was actually closer to 450,000. Much of the Middle and Upper Class departed prior to Israel gaining Independence, knowing that the Arab League and the Arab Higher Committee intended to eradicate the new Nation State as soon as the British left.