Works in Arabic translation can be 'unscholarly and manipulative' (updated)

Update: For a link to the full document (in German) please click here.
A German scholar fluent in Arabic has discovered numerous flaws in an  Arabic version of Professor Mark R. Cohen’s Book Under Crescent and Cross. The Jews in the Middle Ages, calling it  highly manipulative, Islamically-correct and deficient in scholarship.  Such a translation cheats the author, the official sponsors and the unsuspecting reader. Friedhelm Hoffmann summarises his findings for Point of No Return: 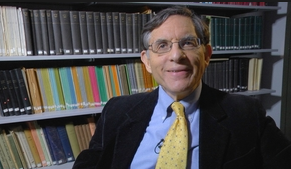 Professor Mark Cohen: 'would be enraged' by the Arabic translation of his work
The Point of No Return post of 2 May 2018, “Who do you think you are kidding, Mr Abbas?”, blamed the Palestinian President Mahmoud Abbas for distorting history. Speaking during the National Palestinian Council in Ramallah, Abbas had stated that “such pogroms did not take place in Arab nations, which had Jewish communities”. Abbas’s statement seemingly relied on evidence provided by Jewish scholars. Indeed, he might have been truly convinced that his opinion was actually supported by serious historical research done by leading western scholars of Jewish studies.

Maybe Abbas had had his views confirmed by reading the Arabic translation of a treatise on Jewish history in the Islamic world, authored by the renowned American scholar of Jewish studies Professor Mark R. Cohen from Princeton University. Could he have assumed that what he had read in Arabic corresponded to what Cohen actually had written in the English original for the American and international readership? Not necessarily. He might have been unwittingly duped by a manipulated and “politically correct” Arabic translation.


This would be the case had he relied on the Arabic translation “Bayna l-hilāl wa-l-ṣalīb. Waḍʿal-yahūd fī l-qurūn al-wusṭā / بين الهلال والصليب : وضع اليهود في القرون الوسطى” (Cologne/Baghdad 2007) of Prof. Cohen’s book “Under Crescent and Cross. The Jews in the Middle Ages” (Princeton 1994). A decade after Cohen had written this historical treatise, he himself saw to its translation into Arabic and delegated the task to two promising Arab researchers at the Free University of Berlin, Islam Dayeh (إسلام دية) from Jordan and Mouez Khalfaoui (معز خلفاوي) from Tunisia. The aim was noble, the result disillusioning, despite the fact that leading research institutions and networks in Germany and the US, such as the Berlin research programme “Europe in the Middle East – The Middle East in Europe” and the Berlin Institute for Advanced Study, the Department of Near Eastern Studies of Princeton University, the BMW Foundation, Herbert Quandt and the Zeit Foundation, Ebelin and Gerd Bucerius, were the project’s official sponsors.


What a noble aim – to overcome the gap between western scholarship in the field of Jewish studies and the Arab readership – to open up western humanities to the Arab reader in his own tongue: a truly enlightened endeavour. Moreover – and this might have been the real reason behind the whole enterprise – this translation granted an academic seal of approval to the two Arab translators. Promoting them as open-minded researchers who do not shy away from delicate topics, such as the situation of Jewish minorities in the Latin West and the Islamic East during the Middle Ages.


Alas, neither aim was reached. What deep disappointment awaits readers of Arabic! One might choose at random any page of the Arabic translation and would find it full of mistakes and misunderstandings of every kind, sometimes even downright and deliberate distortions. Thus, the Arab reader will be confronted with quite astonishing historical and religious assertions. He will read that the Roman emperor Constantius [II] ruled in the fourth century BC (p. 297 n 1); that Judaism counts among its holy scriptures a Hebrew (pp. 87, 268) as well as a Jewish gospel (p. 315); that Islam reveres the “Evangelical personalities” of the Jewish Bible as prophets (p. 309); that the better conditions Jews experienced in the medieval Polish realm, compared to other Western European kingdoms and principalities, materialized in the fact that the Polish monarchs treated their Jewish subjects as badly (sic) as did their Western European counterparts (p. 27). Moreover, according to the Arab translators Dayeh and Khalfaoui, Voltaire (sic) advised Arabs to build modern nation states (p. 43
n 2). And to believe this translation, Cohen talks about “the peoples of Israel” (p. 86) and “all the Jewish peoples in the Islamic world” (p. 233) in the plural. The Arab reader will encounter this kind of mistranslation (and unconscious manipulation) all over the book.


More worrying are the downright distortions wherever Cohen’s facts or judgments do not fit into the worldview of the two translators. To give a major example: Cohen states that “this indulgence of non-Muslims ended abruptly with the Mongols’ conversion to Islam in 1295’: he implies that the “pagan” Mongols were more tolerant rulers prior to, than after their conversion to Islam. Since such a positive judgment in favour of non-Muslims seems not to be acceptable to Khalfaoui and Dayeh, they elide the Mongols’ conversion into “the invasion by the Mongols” [of Baghdad] (p. 25 n. 2), thereby postponing the Mongol invasion of Baghdad from 1258 to the key date of 1295. By this manipulating ruse, the translators manage to lay the blame for the deteriorating standing of non-Muslims in Iraq after 1295 on the alleged invasion by the pagan Mongols, while Cohen originally had traced the deterioration to their very conversion to Islam. Apart from the ideological twist, the translators thereby commit a grave historical error, disclosing their own ignorance of Islamic history, the destruction of the Abbasid Caliphate in 1258 at the hands of the Mongols being a major turning point.


This is just one of many such distortions, which seem to have their origin in a mindset close to the Muslim Brotherhood’s. Apart from the distortions, the translation does not comply with generally-accepted academic standards. One third of the annotations in the footnotes have been omitted for no reason, another third have been kept in the English original, and the last third have been rendered into Arabic in a way which can best be called a preliminary draft.The neglect of the annotations deals a further blow to the academic character of the book.


The translation of the main text is of a higher quality. Nevertheless, it abounds in misunderstandings and mistranslations in addition to a deficient Arabic vocabulary of Jewish and Christian terms and general historical terminology relating to Western Europe. Indeed, the translation does not meet the prevalent academic standards in serious Arabic publications in this field.


Finally, the most serious defect is the complete lack of any references to contemporary Arabic publications in the field of Jewish (and Israeli) studies as would be normal in similar publications by serious scholars and translators in the Arab world.


The Arabic reader will not find any references in his own language, be they Arabic translations of international standard treatises of Jewish studies or indigenous Arabic treatises on Jewish and Israeli topics. This lack cannot be justified on any grounds, since Arab scholars have been building up quite a voluminous library of Jewish and Israeli studies over the last decades.


To sum up, this translation gives a misleading impression of the English original, thereby misrepresenting the discipline of Jewish studies as pursued at American universities. It exploits the Arabic reader’s good faith in the trustworthiness of the translators and the quality of the translation. Yet, this is exactly what Prof. Cohen himself affirms in his preface to the translation. Cohen enthusiastically thanks the able translators and stresses the high quality of the Arabic rendering, thereby admitting that he never read any part of it, otherwise it would have enraged him.


For the Arabic translation reaches its lowest ebb when even the Islamic creed “I confess that there is no god but God” is gravely distorted in the Arabic rendering, thus shaking any Arab reader’s trust in Cohen’s scholarship. If the mistranslation of the Islamic creed was intentional, one can only assume that the two Arabic translators wanted to make fun of Professor Cohen and ridicule his reputation as an international expert of Islamic studies in the eyes of the Arabic reading public.


Such a lopsided, manipulated and “Islamically-correct” translation into Arabic does not benefit anyone. It only furthers the careers of the translators who fake their intellectual grasp of the topic translated. Neither will the western scholar know the Arabic readership’s response on his treatise, since they did not get to read what he wrote, but a deficient version of it. The Arabic readership are cheated as well, since they put their trust in a translation which does not accurately render the ideas of the western scholar. If the two translators thought it wise to distance themselves from some of Professor Cohen’s more delicate topics and conclusions, they could have easily done so in the notes, instead of stealthily interfering in Cohen’s main text.


To come back to my starting point: What is the benefit of joint academic projects between western and Arab scholars, like this translation, if in the end the Arabic readership is deceived and made to believe that they are getting a trustworthy rendering of what the western scholar has written? How can they critically compare between their own viewpoints and convictions and those held by authors and scholars from the West? Does it not, in the final analysis, hamper mutual understanding, when the Arab readership, among them decision-makers like Mahmoud Abbas, are misled ?


Readers who are interested in a more detailed treatment of the Arabic translation discussed above and with a reading command of German, are invited to click here for a free PDF copy of the complete review essay (136p.) from the online server of Tübingen University Library.  The reviewer Friedhelm Hoffmann is  at friedhelm.hoffmann@uni-tuebingen.de.