If more people knew about the banishment of Jews from Arab countries, it would serve as a counter-weight to Palestinian propaganda. It would also make those Jews themselves more conciliatory, argues Ada Aharoni in the Jerusalem Post (with thanks: Lily) : 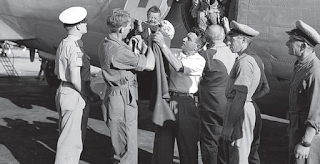 
One of the major recognized causes of the current wave of antisemitism in Europe and other places is Palestinian propaganda. This sweeping brainwashing effort has succeeded in producing an anti-Jewish climate in many parts of the world. One of the ways to combat this basic source of lies is to reveal the truth about the banishment of the Jews from Arab countries. The world has mainly heard about the injustice experienced by Palestinian refugees, and almost nothing about the plight of the Jews from Arab countries, mainly Iraq, Egypt, Syria, Lebanon and Yemen. Let us compare the uprooting of the Palestinians with the uprooting of the Jews.

Whereas the Palestinians refugees numbered 650,000 in 1948, the Jewish refugees from Arab countries numbered 850,000 (UNRWA statistics). The Jewish property, both private and communal, sequestered by Arab governments when the Jews were forced to leave was much vaster than that left behind by the Palestinians in Israel (documented by the International Court at The Hague).

There was practically an ethnic cleansing of Jews in Arab countries. Very few Jews are left in these countries today. Egyptian Jewry, for instance, numbered 100,000 in 1948, but there are only 28 Jews in the whole of Egypt today, and only 22 Jews remain in the whole of Iraq of the 1948 population of 160,000. In Syria and Lebanon there are no Jews left.

On the other hand, there was no ethnic cleansing of Palestinians in Israel; there are a million Arab/Palestinian citizens living in Israel today, constituting 20% of Israel’s citizens.

It is important to spread these crucial historical facts as widely as possible, as they contradict the evil and distorted image presented by anti-Israel propaganda. In addition to the possible turning of public opinion in Europe and other places, telling the story of the banishment and uprooting of the Jews from Arab countries has additional potential advantages.

The realization that they are not the only ones who have suffered, and that the Jews from Arab countries have suffered just as much as the Palestinians when they were thrown out of the lands of their birth with only their shirts on their backs and were made so miserably destitute at the hands of Arabs, may cause Palestinians to become more conciliatory and less intransigent regarding peace with Israel.

Read article in full
Posted by bataween at Thursday, April 26, 2018

Or if people knew about the banishment of jews from many places in palestine (as well as from the "arab" countries), that would also serve as a counter-weight to palestinian propaganda.

Agreed. the difference is that these Jews may be in a position to claim restitution.

So are the palestinian jewish refugees.

Then there were thousands of Jews driven out of homes in what became Jordanian-occupied "east Jerusalem," in `Atarot, Neveh Ya`qov, Qalyah, Kfar Darom [in the Gaza Strip], etc.

Arabs were driving Jews out of their homes in the country as early as 1920, although what happened in that year was relatively minor in terms of numbers but still symbolic and presaging the future.

"Arabs were driving Jews out of their homes in the country as early as 1920." The country you are referring to presumably is Palestine. There are 6 million displaced Palestinians with approx half living in refugee camps outside of Palestine now called Israel. There are 1.2 million living as second ckaclass ss citizens in their own homes the ones that have not been demolished as yet in Israel and there are 4 million Palestinians living under Israeli occupation in refugee camps and on their own land what is left of it. And your point is?