The Syrian ambassador to the UN has complained that Israeli and Turkish intelligence operators have removed precious artefacts from what is left of the Jobar synagogue near Damascus. It is not clear how much of the site survived a bombing in 2013. Rumours have since circulated that the Syrian army or the Islamist rebels had looted the synagogue. The Israeli ambassador to the UN has accused the Syrians of trying to divert attention from the civil war. Story in the Jerusalem Post: (with thanks: Yoel) 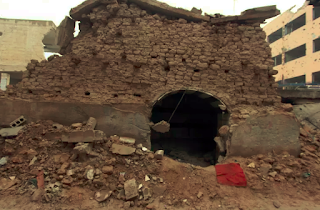 What's left of the Jobar synagogue after its bombing in 2013

In a formal complaint sent to the United Nations Security Council, Syria’s Ambassador to the UN Bashar Ja’afari accused the two countries of cooperating with “terrorist groups” to remove valuable items from the Eliyahu Hanavi Synagogue, also known as the Jobar Synagogue. 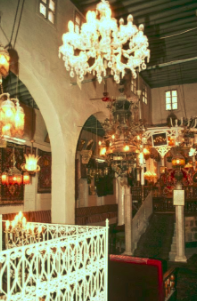 The Jobar synagogue as it was

“[My] government wishes to transmit highly credible intelligence to the effect that the terrorist groups that are active in the area of Jobar, near Damascus, cooperated with the Turkish and Israeli intelligence services to loot artifacts and manuscripts from the ancient synagogue there,” Ja’afari said.
The Syrian ambassador went on to write, “The items were then smuggled through local and foreign intermediaries to Istanbul, where they were received by antiquities experts who certified that they were extremely valuable antique objects. The items were subsequently smuggled to New York.”
In a response provided exclusively to The Jerusalem Post, Ambassador to the UN Danny Danon called the letter a distraction aimed at drawing the world’s attention away from the Syrian civil war, which has left more than 500,000 people dead over the past seven years.

Read article in full
Posted by bataween at Tuesday, March 27, 2018