Prime minister Benjamin Netanyahu is beset by allegations of scandal and corruption, but his Sephardi/Mizrahi support base in Israel's poor periphery remains solid. This New York Times article by Isabel Kershner typically attributes his popularity to Sephardi resentment of the Ashkenazi 'discrimination' these Jews experienced on arrival in Israel. But it is fear and mistrust of the Arabs, among whom they lived for generations, which drives their politics. 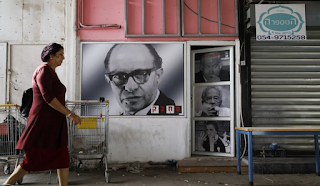 Posters of Israel's prime ministers look on in a street in Netivot (Photo: NY Times)

Reflecting one of Israel’s oldest social divides, many of Likud’s staunchest supporters come from so-called development towns like Kiryat Malachi. These grew out of transit camps hurriedly set up in the 1950s to absorb waves of immigrants, mainly Sephardic Jews from Arab countries.

The country’s Zionist pioneers of European descent, socialists who dominated the state after it was founded in 1948, were struggling to populate the more remote corners of their young and poor country. So they directed the new immigrants to these once-desolate outposts while denigrating their culture.
The tents and shacks gave way to rows of public housing that became hubs for the have-nots on the margins of Israeli society. The development towns have since expanded to include neat neighborhoods of single-family homes and have absorbed immigrants from Ethiopia and the former Soviet Union.

Former Prime Minister Menachem Begin was the first leader to harness the feelings of resentment among the Sephardic Jews, helping to sweep Likud to its first victory in 1977. The power of the conservative camp has only grown since. But among Netanyahu supporters, the underdog sentiment and distrust of the old, liberal elite still run deep.

Israel has long been polarized between a hawkish right-wing that has taken a harder line toward the Palestinians and a leftist camp more willing to compromise on territory to reach an accommodation.

“The Sephardim in Israel won’t change their skin even if there’s no food in the house,” said the greengrocer, Mr. Ayyash, whose family came from Morocco. He described how his mother would sit in their tin shack with six of her 11 children on her lap to keep them off the wet floor in winter.

Mr. Ayyash said all five of his children, now married, also support Likud.
“It’s genetics,” he said. “I don’t need to tell them anything.”

Read article in full
Posted by bataween at Friday, March 23, 2018