The representative of the Jewish Community in Kurdistan, Sherzad Mahmoud Mamsani, has been fired 'to appease Baghdad' according to this Times of Israel piece. The news does not come as a total surprise to readers of Point of No Return. In March 2017, we reported that the Jewish Directorate had been suspended, ostensibly for lack of funds. From the outset, rumours have been swirling around the figure of Mamsani: he is not a Jew, he is responsible for the 'fake news' that Kurdistan still has a Jewish community - and even enlisted the help of an Israeli rabbi to reconstruct it in order to attract US funds - or, he is an Iranian agent. Whatever the truth, it seems that Kurdistan wants to reset its relationship with Baghdad following the disastrous independence referendum in September 2017.(With thanks: Lily)

Update: Mamsani himself has left a comment. This accuses the journalist, Judith Neurink, of misinformation putting his life at risk:
Shalom
There is some very misleading information in the report
Some information is threatening my life
I am three years with all my efforts I served my mother's religion in the midst of fire
If I have a position or without positions
I am proud of my Jewish religion and our Jewish and Kurdish people
So far I am a constant activity and struggle
Sherzad Mamsani

IRBIL, Iraq – After working for Iraqi Kurdistan’s Ministry of Endowment and Religious Affairs for two years, the region’s Jewish representative, Sherzad Mamsani, has been let go. The move is especially peculiar since Mamsani’s position was unpaid.

Mamsani said he was not forewarned about his dismissal, which occurred while he was on sick leave abroad.

Mariwan Nasqshbandy, the director of religious coexistence at the Endowment and Religious Affairs Ministry, hinted that the firing could be an effort by the Kurds to reconcile with Baghdad following shaky relations after an independence referendum in September of last year. In the referendum, 93 percent of Iraqi Kurds voted for secession and an autonomous state.

Nasqshbandy said that the move was likely political because the Religious Affairs ministry previously ignored his complaints that Mamsani was proving ineffective at mobilizing Kurdistan’s dormant Jewish community.

Mamsani was one of seven religious minority representatives whose posts were created by the Kurdistani parliament in 2015. The Jewish representative’s position was unique in that its aim was to unite Kurds whose Jewish grandparents converted to Islam. He wanted to offer them a Jewish education and opportunity to return to their roots.

To help rebuild the Jewish community in Kurdistan, Mamsani looked for help from Rabbi Daniel Edri, the chief of the Haifa, Israel, rabbinical court.
In a telephone call with The Times of Israel, Edri claimed that Kamal Muslim, the Minister of Endowment and Religious Affairs, appointed him chief rabbi of Kurdistan. (Naqshbandy said he had no knowledge of this.)

A December 30, 2017 post on the Facebook page entitled Rabbi Daniel EDRI, Kurdistan claimed that the region had a new rabbi for the first time in years. 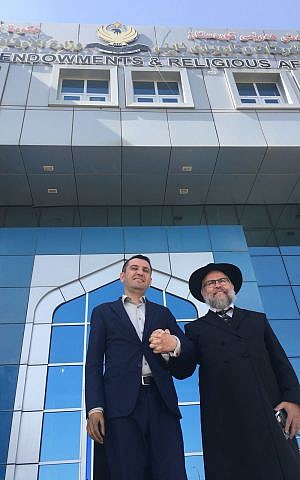 Sherzad Mamsani, left, with Israeli Rabbi Daniel Edri, who is helping trace Jewish lineage and rebuild the community in the region. (Courtesy)
“Hello my friends from all over the world,” the post said. “Its Kurdistan have new Rabbi after 70 years [sic]. Its the first time after 70 years a Rabbi can start in Kurdistan the new Jewish life.”

The rabbi stressed that Israel did not send him and that he has no political motivations. “I will only work for the religion, since the [locals] do not have any information on the Jewish laws,” Edri said.

Since the September referendum, Kurdish airports have been closed for international flights and Iraqi troops have taken control of disputed territories formerly overseen by the Kurds, including the oil rich city of Kirkuk. Iran also temporarily closed its borders with the Kurdistan region.

Edri expects to return to Irbil as soon as international flights are resumed, although Naqshbandy said he would prefer to have a Kurdish rabbi who speaks the language.

In most Muslim countries leaving Islam is considered a crime, but returning to Judaism is especially discouraged by the staunchly anti-Israel governments in Baghdad and Tehran. Both countries were incensed when Israeli flags appeared at rallies during the referendum campaign, where Israel was touted as the only state supporting the Kurdish demand for secession.