The only Jew (with his family) still living in Monastir, Tunisia, is running as a candidate for the Islamist Ennahda party in the local elections, the Christian Science Monitor reports. No doubt Simon Slama's candidacy will be seized upon as an example of Tunisian 'pluralism' and 'tolerance'. (With thanks: Lily) 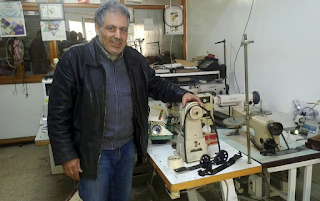 March 23, 2018 Tunis, Tunisia —Simon Slama and his family are the only Jews left in the Tunisian city of Monastir, once home to a thriving Jewish community. But instead of joining the exodus, he is running for office – as a candidate of Tunisia's Islamist party.

Mr. Slama's candidacy with the Ennahdha party in May municipal elections is causing a sensation in this overwhelmingly Muslim country, and some controversy.

Critics see it as a calculated tactic by Ennahdha to regain power and to restore its reputation among Western allies like the United States. Others however see it as an example of Tunisia's long-standing traditions of tolerance.
A sewing machine salesman and repairman, Slama says he just wants to serve his country and the city where he was born, suffering from economic difficulties and social tensions.

"I chose Ennahdha because I found that because of the crisis the country is going through, everyone is turning toward this party," he told The Associated Press in his workshop.

"I see no difference between the Islamic and Judaic religions. We are all one family and we are all Tunisian citizens and we should go hand in hand to build the Tunisia of tomorrow," he said.

Slama returned to Monastir, on the Mediterranean coast about 105 miles south of the capital, Tunis, after studying in the French city of Strasbourg even as other Jewish families left because "we love the city and it has the spirit of my ancestors."

Tunisia is home to an estimated 1,500 Jews nationwide. Monastir "used to have 520 Jewish families. Today mine is the only one left," Slama said.