More evidence that music can help break down barriers between Israel and the Arab world: Israel's Eurovision entry for 2018 by Netta Barzilai seems to have gone down well with the Arab world. Haaretz reports: (with thanks: Yoel) 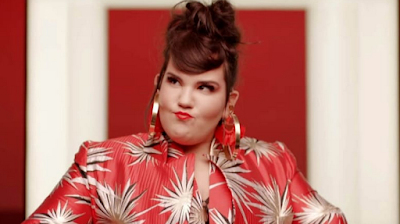 Israel’s Eurovision entry is already the favorite to win the tournament on betting sites, and now, it’s arousing interest in Arab countries as well.

The Foreign Ministry shared a video of Netta Barzilai performing “Toy” on its Arabic-language Facebook page, which has 1.5 million followers. Several users declared that they hate Israel but nevertheless wished Barzilai success.

“I liked it,” wrote Hamad from Morocco. “Good luck, girl. Morocco is with you.”

Olaya, a woman from Morocco, wrote, “I’m in love with this song!” Another Moroccan even invited Barzilai to make a joint video with two Moroccan singers.

Abu Majd from Saudi Arabia was also encouraging. “This isn’t the type of music I like, but this song has everything it takes to become an international hit,” he wrote.

Ahmed, an employee of Iraq’s Interior Ministry, wished Barzilai luck. That prompted an Egyptian, also named Ahmed, to attack him.

“You’re a Muslim, but your feelings are Jewish,” he wrote. “You don’t deserve the name Ahmed.”

The Iraqi retorted, “What does religion have to do with music and competitions?”

Another user called the song "wonderful", saying it mixes Arabic, Western and European music. A resident of Yemen said Barzilai had a beautiful voice and also wished her luck.

Yonatan Gonen, who heads the Arabic desk in the Foreign Ministry’s digital diplomacy department, said the post also garnered many comments from women, even though the page has few female followers.

“Many women from Morocco commented on the song,” he said, adding that Morocco “is a relatively open and liberal country, so many women apparently found something empowering in this song and wrote about it. The fact that it was posted around International Women’s Day was significant in this regard.”

All about the A-wa Yemenite music band