Iran's 25-year countdown to the destruction of Israel

Iran has inaugurated an “Hourglass Festival” celebrating the “imminent collapse” of Israel, based on a secret “plan” by the Islamic Republic announced in 2015 to destroy the Jewish state within 25 years, Iranian media has reported. The Times of Israel has the story:

The festival, dedicated to anti-Israel art and media productions, is a symbol of the country’s upcoming destruction, said Hossein Amir-Abdollahian, Iran’s former Deputy Foreign Minister and current assistant to parliament speaker Ali Larijani, at a press conference launching the event.

In 2015, Iran’s Supreme Leader Ayatollah Ali Khamenei predicted that by 2040 there will no longer be a State of Israel. At a Quds Day rally in Tehran in 2017, the regime unveiled a clock counting down the days until the Jewish state’s predicted doom. 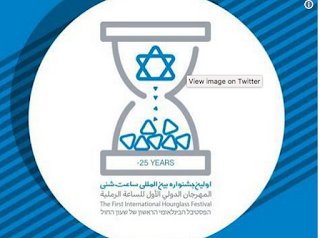 Poster for Iran’s ‘Hourglass Festival’ to celebrate Israel’s imminent destruction.
Amir-Abdollahian said he could not publicly reveal the regime’s plans to ensure the destruction of Israel.

Read article in full
Posted by bataween at Monday, March 05, 2018

It is scandalous that supposedly democratic universalist Western countries habitually overlook Iranian threats of genocide against Israel. Obama and other Western leaders, like Merkel, made a bad deal with Iran that only enables it produce a nuke weapon.

Perhaps they are hoping that Iranians will add to the technology.
--malca