How Jews from Egypt marked the feast of freedom

Some 25,000 Jews were forced to leave Egypt after the Suez crisis of 1956. Here is  the late Teddy Nahmias's account of Seder night aboard the ship taking him to freedom in his new home of Italy. Jewish Renaissance carried the story:

Following the unfortunate events of 1956 and the Suez Canal crisis, hundreds of Jewish families packed their belongings and left Egypt, most boarding ships sailing from Alexandria , bound for 26 European Mediterranean ports.My family chose Italy, my father's dream land. As a Corfiot he felt Venice was his cultural home, so we were on our way to Venice and Trieste. The vessel was the S/S Enoiria, a smaller version of the famous S/S Esperia of Adriatica fame, those white luxury liners that rode the Mediterranean with the Lion of Venice watching over from the yellow chimneys. 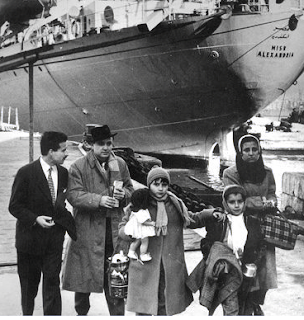 We took the lift down from our fifth floor flat in Mazarita for the last time. Some of our neighbours opened their front doors and stood in silence on the landings to watch us go. Mohammed, our imposing Sudanese (porter), was sobbing like a child. There was no coming back. The emotion was high and my mother could not stop her tears. Dad became tense as we went through customs and police clearance, but felt more comfortable as he walked the steps to the deck. After all, he was already on Italian soil.

As for myself, I was in a daze, feeling that something irreversible was taking place, but too young to realise the implications. I was probably hoping to find another group of youngsters at the other end that would recreate the rock 'n' roll fun-loving crowd I had left behind. As the ship started to move away from the dock and head for the high seas, we all waved goodbye, and slowly turned our heads from the land that we were not to see again for perhaps half a century.

I noticed a few young people around my age and naturally was drawn to them. My parents by now were in conversation with other Jews who were on their way to Canada. Others were due to catch a ship from Trieste to Australia. Suddenly someone said," but tomorrow night is Pesach night.

Shouldn't we mark the occasion somehow?" A charming and understanding officer decided we could use a section of the dining room, and I recall about 25 of us sitting around a number of tables assembled to form a long table. To top it all, as a gift from the Captain, a beautiful cake was placed in the centre of the table with the compliments of the Chef, the crew and the officers. How embarrassing: no matzah but instead a massive torta to celebrate the festival of the unleavened bread.

I remember my father laughing and I also remember a discussion on who would officiate. A Haggada was found. I cannot remember whether or not the cake was eaten. We were Jews leaving Egypt, celebrating Jews leaving Egypt. Had we fallen into a mysterious time warp? Although not realising it at the time, we had gone through a unique experience never to be repeated. This time the bread had risen.

Wishing all readers Hag Pesah Sameah or a Happy Easter!

Posts about Passover
Posted by bataween at Friday, March 30, 2018