Do not give artefacts to states which expelled their Jews

The injustice of sending the Iraqi-Jewish archive back to Iraq, which stole it in the first place, has been extensively documented on this blog, but few are aware that the US has been signing laws and memoranda with Arab governments which will result in unfair import restrictions on artefacts belonging to exiled minorities.  (Arab states such as Yemen argue these are essential to prevent artefacts being smuggled out of the country). Lawyer Carole Basri explains in The Times of Israel (with thanks: Imre; Michelle): 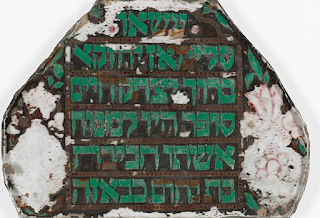 Detail from a tik (Torah casing) found among the 2,700 artefacts and documents that comprise the Iraqi-Jewish archive
In May 2003, over 2,700 Jewish books and tens of thousands of documents, records, and religious artifacts were discovered by a US army team when in the basement of the Iraqi intelligence headquarters flooded. This written record provides a robust understanding of the 2,600-year-old Iraqi Jewish community: the texts were sent to the US to be preserved, cataloged, and digitized, and they have been on exhibit in a number of cities for several years. Now, based on an executive order signed by President Bush in 2003, and extended by the US government in an executive order signed by President Obama, the Iraqi Jewish archive is set to be returned to Iraq in September 2018.

On a parallel track, but unknown to the Iraqi Jewish community, the Emergency Protection for Iraqi Cultural Antiquities Act of 2004 was amended in 2008 to include import restrictions on Jewish artifacts, including Torah scrolls, made on or before 1990. Then, the State Department put together separate Memorandums of Understanding, where the Jewish religious and cultural artifacts from Egypt, Syria, and Libya would be returned to the governments that had ethnically cleansed their Jews out of existence. Yet the Emergency Protection Act and the Memorandums of Understanding stipulate that religious or cultural artifacts need to be returned to their country of origin (limited, in the case of Iraq, to those artifacts made before 1990). It is like saying Jewish property that was looted during World War II and found in the US must be sent back to Germany. It allows these Jewish artifacts and documents to get into the wrong hands, hands of people who never owned them, and might not protect them from destruction.
The key point to remember here is that these artifacts — religious and cultural artifacts that are sacred to my community — never belonged to Iraq in the first place. The items are expropriated property stolen under the color of law that either belonged to private citizens or to the Iraqi Jewish community. It is critical to note that there is no longer a Jewish community in Iraq.

It is not just about the Iraqi Jewish archive though. They are part of a larger issue impacting Jews and Christians that needs to be solved. The Emergency Protection Act and the Memorandums of Understanding result in unfair consequences, and they do not take into account the circumstances at hand. The issue of potential return of stolen Jewish property to countries such as Iraq, Syria, Egypt, and Libya that ethnically cleansed the Jews is growing as red lists are published at US Customs, and countries such as Yemen may be added to those countries covered by Memorandums of Understanding. Suffice to say that the Emergency Protection Act and Memorandums of Understanding are not understanding or protecting at all of Jewish and other minorities’ artifacts.
Indeed, the Jewish populations of those Middle Eastern countries are now minuscule after years of violent persecution leading to ethnic cleansing. Of the million Jews living in Arab countries in 1948, fewer than 4,000 Jews remain. In Iraq in particular, the count is just five Jews.

Yet, the United States government, using the Emergency Protection Act and Memorandums of Understanding has placed import restrictions on cultural artifacts produced by Jews, Coptic Christians and other minority peoples, on behalf of Egypt, Syria, Libya and Iraq. Further, the United States government has promised to return the Iraqi Jewish archive to Iraq’s sectarian government in September 2018, including the notes of the Ben Ish Hai, a 19th century scholar, and a 16th century Jewish book seized by Saddam Hussein’s secret police.

Sign the petition if you haven't already.
Posted by bataween at Wednesday, March 07, 2018