For the second year running, Israeli government Social Equality Minister Gila Gamliel has honoured three outstanding Israeli research projects for their contributions to the study of Mizrahi Jewish communities at a special awards ceremony in Jerusalem. Israel Hayom reports. (With thanks: Lily) 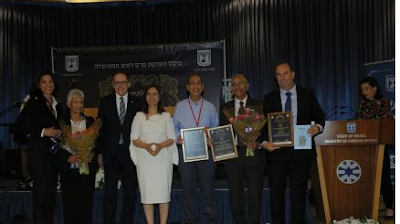 The 150,000-shekel ($43,000) Prime Minister's Prize for Encouraging and Empowering Research about Jewish Communities in Arab Countries and Iran was split equally among the three winners: Dr. Ovadia Yerushalmi, for his research titled  "The Five Long Minutes" on the arrests of hundreds of Egyptian Jews in the 1967 Six-Day War; the Association for Society and Culture of Yemenite Jewish Tradition, for its publication of the Teima Journal for Judeo-Yemenite Studies; and the World Organization of Libyan Jews for Gershon Stav's "From the Abyss" research on Libyan Jewry during World War II.

This was the second year of the ceremony was held, after Gamliel suggested the prize and won the cabinet's approval and a budget in 2016.

"Over the past two years, the State of Israel, which has taken part in historic injustices [in failing to sufficiently recognize Mizrahi Jews], is itself spearheading efforts to bring historic justice through the Social Equality Ministry," Gamliel said. "It is important that we honor the pioneers who have invested all of their efforts to research the legacy and history of Eastern Jewry, turning the wheels of history."